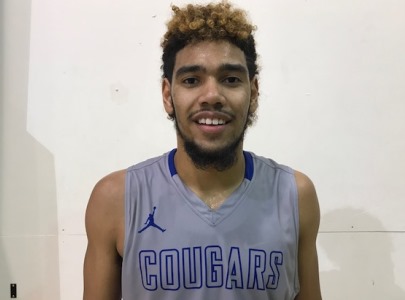 South Mountain Junior College (7-1, 2-0) has been through some changes this season, after re-hiring former long-time head coach Dan Nichols just before the start to the season.  While the coaching change would be an adjustment for this year's Cougars' team, the group has not missed a beat this season, as they are off to an excellent start.  On Wednesday evening, South Mountain would host a talented Arizona Western team that would be without the services of several key players.

South Mountain would capitalize on the evening, as they would look very confident in the contest - getting what they wanted throughout the game.  South would jump out to a quick 16-11 lead with 12:46 left to play in the first half, behind the strong play of 6-foot-4, 205-pound sophomore guard/forward Jacob Inclan.  Inclan would make a strong drive to the basket, and then knock down a three-pointer from the wing early.  Inclan was coming off a strong 37-point performance in his last game, and he would pick up right where he left off last week.  After another mid-range jumper off the glass by Inclan, South would take a 20-11 lead.

Then 6-foot sophomore guard Rolando Rhymes would drive to the basket and kick to 6-foot-5, 200-pound freshman guard/forward Coleson Struhs for a three-pointer to push South ahead big early, 25-16, with 8:53 left to play in the half.

Arizona Western (5-5, 0-2) though would fight hard to get back in the contest, and would narrow the South lead back to 2 points before the half, 36-34.

That would be the last lead for AWC, as South would get it going.  A three-pointer by 6-foot-6 sophomore forward Bryan Battle, an offensive tap in by 6-foot-8, 215-pound sophomore post Matt Morgan, and then an assist by talented 6-foot-3 freshman guard Darion Spottsville to Morgan, who would finish the play after being fouled, would give South a 55-48 lead with 12:29 left to play.

Sophomore guard Rolando Rhymes would then get into the action and convert a three-pointer in transition, then a layup in transition and then another driving layup with 5:07 left to play to give his team a 7-point lead, 72-65.

Spottsville would then finish off the victory with a strong drive to the basket, and a nice one-handed dunk over a defender after being fouled on the play.  The three-point play by Spottsville would put South ahead big, 82-68, late in the game.

South Mountain would go on to finish on the big home win, 87-75, over visiting Arizona Western.

South Mountain will next host Scottsdale JC on Saturday, while Arizona Western will not play again until Wednesday, December 6th @ home against Cochise College.