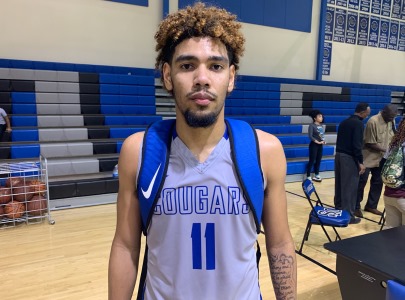 South Mountain Junior College (10-12, 5-9) has struggled this season to win ball games, and also to gain any level of consistency as a team.  The team is actually very talented and has the ability to make a strong run late this season, if they can squeak into the post-season.  On Wednesday evening, the team proved their desire to make such a late season run, as they faced a very well coached Scottsdale Junior College (16-6, 8-6) program at home.

It was a tale of two different ACCAC Division-II programs, as South Mountain, coached by long-time ACCAC Head Coach Dan Nichols, has had their struggles, while Scottsdale has had an excellent season under the leadership of Head Coach Mark Bunker.  Bunker has had his best season at the helm for Scottsdale, and has coached his team to the top of the ACCAC standings all season.  A win for Scottsdale would keep them at the top of the conference standings among division-II programs, and also keep them in the hunt for a Division title, while a win for South would give them life, as we near the conference post-season.

It was be a hard-fought contest and a very close match, as the two teams of players both understood the important for each respective team.  Scottsdale would take a narrow 31-27 lead into halftime, after a 3-pointer at the halftime buzzer by 5-foot-10 sophomore guard Carlos Tovias.  Tovias' three-pointer would give the Cougars hope and the momentum late in the half, as both teams would prepare for a strong second half.

Quickly in the game's second half, South Mountain would take the game's lead, 34-33, with 15:46 left to play, after an assist by 6-foot sophomore Edajh Fawkes in transition to 6-foot-8 sophomore wing Zach Williams.  After a nice left-handed layup by 6-foot-3 sophomore point guard Darion Spottsville in traffic, and then a long three-pointer from 6-foot-6 freshman forward Donovan Reagan, and South Mountain would take a narrow 3-point lead, 36-33.

Scottsdale though would take back the lead, 45-43, with 10 minutes left to play after a mid-range floater from 6-foot-4 sophomore guard Josh Hankins, and then a steal and layup from 6-foot-5 freshman wing Xavier Fuller.

South Mountain would come back to take the lead late, 56-53, after a layup inside by Donovan Reagan, and then a steal and layup in transition from Fawkes.

After a basket inside the paint late from 6-foot-6 freshman post Chris Orozco, to keep Scottsdale close, Spottsville would keep his Cougars ahead late with a contested mid-range jumper, 58-55.

Freshman point guard Donald Carter has had an excellent season for Scottsdale, and he would try to win the game late for his team.  A floater from Carter would pull Scottsdale to within one point of South Mountain, 58-57.

After a missed forced shot attempt late in the shot clock by South Mountain, Scottsdale would also force a shot late in the shot clock, which would give South back the basketball.  But after being fouled, Spottsville would miss the front-end of a one-and-one - giving the basketball back to Scottsdale with :10 seconds left to play.  After looking to make something happen for his team, Donald Carter would fail to get a good shot attempt off, and would be forced into a rushed and forced shot at the buzzer, which would fail to convert - giving South Mountain the big home victory, 58-57.

Scouting Notes:  South Mountain 6-foot-3 sophomore guard Darion Spottsville has had a tough sophomore season for himself, but he is a talented point guard prospect with good size, and a good overall skillset, combined with good overall athleticism on both ends of the floor.  A bigger point guard prospect, Spottsville is a floor general of sorts, and enjoys making things happen for his teammates.  A good mid-range shooter with a good overall mid-range game, and a good ability to finish in traffic and in the open floor.  Can play in an up-tempo style style or in a half-court set, and is better with better players around him.  A good rebounder.  A versatile prospect that is a definite sleeper late for a division-I program . . .

South Mountain 6-foot-8 sophomore wing Zach Williams has really grown on me this season.  A bigger and skilled wing prospect with a nice shooting stroke with range, Williams is an attractive prospect for a program looking for a bigger shooter.  A very underrated prospect with a good overall skill level and a nice shooting stroke, which he is able to get off quite well against defensive opposition.  Runs the floor well and is a good finisher in transition.  A very good sleeper prospect with a good overall feel for scoring the basketball.  Will make some program very happy . . .

Scottsdale JC 6-foot-2 freshman point guard Donald Carter has been as good a point guard as there has been in the conference this season.  A very skilled and crafty floor general with an excellent handle of the basketball, and an ability to get into the lane and make plays for himself and others.  A good finisher with excellent body control.  Has very good court vision.  Needs become much more consistent in his ability to make shots with range, which would greatly improve his overall ability to be effective.  Pushes the basketball up the floor.  If he returns next season, he will be very highly recruited next season.  Coming off a very good season for himself.