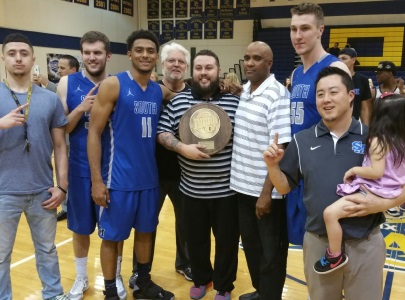 Phoenix College head coach Matt Gordon, his experienced staff and his talented teams have been the class of the ACCAC's Division-II ranks for many years now - winning three consecutive ACCAC Division-II titles and 7 titles in 11 seasons.

This year would be much different for Phoenix College, as they would lose many players from last season's dominant team, including the league's best player in Brandon Brown, now a starting point guard for Loyola Marymount.  As a result, Gordon and his staff would perform another excellent coaching job this season, coaching a much less-talented team of players to another excellent season.  For another terrific season, Matt Gordon would earn ACCAC Coach of the Year honors earlier this week.

After two consecutive years of facing Tohono O'Odham JC in the D-II championship game, Phoenix College (24-8, 16-7) would now face a talented South Mountain team in the final game.  South Mountain (20-12, 15-8) has been on a tear late this season, and has been hungry for a division title.  South head coach Daven Vo and his very talented staff of coaches have worked hard to bring the title back to South - riding the superb talent this season of the conference's top performer, 6-foot-9 sophomore post Connor MacDougall (University of New Mexico signee).  McDougall has been terrific all season long - leading the conference in numerous categories, and recently coming off an NJCAA National Player of the Week honor.

The play of McDougall, combined with the play of sophomore guard Jackson Price and 6-foot-4 freshman forward Terrence Johnson have made South Mountain tough to beat all season.  MacDougall, Johnson and Price each ranked among the top overall performers in the ACCAC this season, as all three prospects rank among the top 10 overall scorers in the conference - something I have not seen in some time in this league.  They are a perfect match together as well, as each prospect represents a member of the post position, wing and guard positions.

Friday evening, in front of a standing-room only crowd at Phoenix College, a great sight to see, the two programs matched up in an intense battle.  The game was played at a high level and with emotions running very high - for the players and the fans.

With the "Big 3" being the main focus for South Mountain all season, 6-foot-3 sophomore guard Gavin Wood has emerged this season as another scoring option for the Cougars - shooting the basketball at a high clip for his team.  With defenders draped all over McDougall in the game Friday evening, a three-pointer by Wood late in the first half would give South Mountain a big 40-27 advantage with :35 seconds left to play.

South Mountain would hold on to a 40-30 halftime lead.

Phoenix College would not back down or lay down, and they would come out firing in the second half.  Phoenix College 6-foot-6 sophomore forward Brandon Tuggle was one of the top overall performers in the ACCAC this junior college season, and has overcome a lot to get back to form as a player.  Tuggle was an elite prospect many years ago while a standout at Westwind Prep Academy, but went through some personal struggles.  Tuggle would show Friday evening how hard he has worked to return to his original form as a player.  Quick back-to-back baskets by Tuggle to start the second half would give Phoenix huge momentum.

Another player that has been big for Phoenix College the past two season is 6-foot-5 sophomore guard/forward Russ Davis.  Davis is a big-time shooter and always comes up big for Gordon and his team in big games.  After a Davis three-pointer, a dunk in transition by Tuggle, and a floater in the lane by Tuggle, Phoenix College would be on complete fire.  Davis would knock down an amazing (5) consecutives three-pointers to tie game at 53 all - as good a shooting performance as I have seen all season.

But Gavin Wood would keep it going for South Mountain - hitting back-2-back three-pointers himself to keep South in the game.  Wood would hit a big and long three-pointer with 7:43 left to play to give South a 60-55 advantage.

Terrence Johnson would struggle in shooting the basketball in the game, but Johnson would make his presence felt with 1 minute left to play - hitting a big three-pointer to give South a 72-66 lead.

South would win the Division-II Championship, 74-71 - advancing now to play in the national tournament.

Phoenix College was led by 18 points from Brandon Tuggle, and 15 points from Russ Davis (all from 3-point range in the second half).

Congratulations to the South Mountain players and coaching staff on an excellent season, and also to Phoenix College on another terrific title run as well.