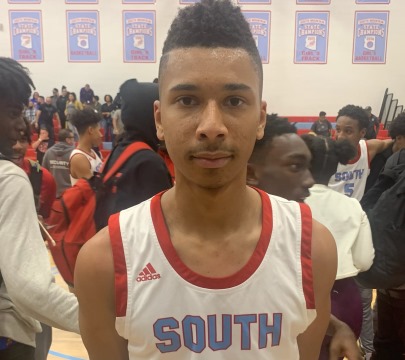 South Mountain High School (23-5) has had a terrific season, led by a very strong coaching staff and a talented group of young prospects. Hard-working Head Coach Jeremy Soria and his team have the South Mountain community very excited this season, as the Jaguars are looking to win it all this high school season.

On Friday evening, South Mountain hosted the quarterfinal 5A State Playoff game, as they would face another talented and focused high school program, Buena High School. Buena (25-4) is always consistent in their annual pursuit for a state title, as Head Coach Dave Glasgow is among the elite coaches in the state, and always develops a blue-collar team, which is tough to beat - making for a very exciting playoff contest Friday evening.

The South Mountain crowd was the best I have seen at the program in some time, as the community is well behind this program and team and looking for South Mountain to get back to the mountain top. With such a storied program in the state, it was nice to see former South Mountain coaching legends Clement Champman and Tres Chapman both sitting upstairs for the game - looking down on the game's action throughout the evening. South Mountain JC long-time assistant coach Harry Cannon also was in attendance for the contest - another South Mountain and Carl Hayden HS basketball legend.

In the second period, Buena would come back to make the game close, and after a three-pointer from 6-foot-2 senior guard Jaylen McFadden, and a driving basket by 5-foot-9 senior Brock Fenton, South would continue to hold on to a 17-15 lead with 5:12 left to play in the first half.

The third period would be big for South, as they would blow the game wide open in the second half. Another three-pointer by Freeney and then an offensive rebound and put-back from 6-foot-2 junior guard Mason Thomas, and South would take a 41-30 lead late in the third period.

With 6:15 left to play in the contest's fourth period, another three-pointer from Freeney would give South a comfortable 46-34 lead in the playoff game. South Mountain would then cruise to a 57-43 playoff victory, as Buena would struggle to make shots down the stretch.

South Mountain will now advance to face #1 seed Millennium HS in the 5A State Semi-Finals next Thursday (2/27) @ Millennium High School, in what will be a very exciting contest. Millennium narrowly defeated South Mountain in their last match-up, 63-62, in early December.