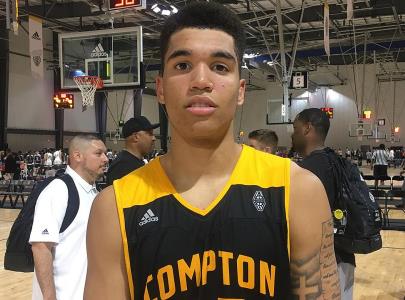 The exciting Hoop Hall West took place this past weekend at Chaparral High School in Scottsdale, Arizona, and there were many top individual performers in the event.  While the Arizona Preps' staff was in full force for this year's event, here are some of the top performers that were seen and evaluated by Arizona Preps' staff writer Derek "DJ" James over the weekend . . .

This is a special wing player.  He’s about 6-foot-5 and plays with so much poise.  He slashed through the lane so smooth and makes it look easy, but he’s working for those buckets.  He has a very nice shot.  The way he gets through the lane reminds me of Dwayne Wade, because of how smooth he is.  He has good basketball IQ and really good court vision.  He can score inside and out.  You can see while he’s playing that he looks like he sees what’s going to happen before it does.  He scored 40 on a really good team in the event.

Tyrek had a quiet 18 on Saturday against a loaded Findlay Prep (NV) team.  I feel like he really had to work for those buckets.  He wasn’t really being fancy, rather he was playing solid basketball.  He is a very mentally tough guard.  He can score in all ways.  He is a good shooter with range, and also has a very good mid-range game.  I don’t remember him making or attempting layups.  Possible that I could have missed some.  It was very difficult to get a layup between the Findlay Prep two 7-foot big men.  He showed good shot selection and stayed aggressive the whole game.  A good ball handler and can create his own shot.  He can definitely bring firepower, good defense and will help a team win.  Findlay College Prep is just not a normal team.  A nice division-I guard prospect.

Wesley is a strong, athletic wing who will not stop coming at you.  He attacks the rim under control, and can throw it down with authority.  He probably had about 5 dunks against a very good Findlay Prep (NV) team.  He’s really athletic and can handle the ball.  He’s more of a slasher than a shooter, but can hit the open shot.  He could of had more but it was tough with two 7-footers in the paint.  He can play D-I for sure.  A team will benefit from his style of play.  He will put pressure on the defense and play good individual defense.  He has long arms and altered shots.

This is one really strong kid.  He has a strong body and is built like a healthy horse.  He’s very strong and likes to finish strong.  He altered a lot of shots and rebounded the ball very well.  He’s playing well right now.  He can put the ball on the floor pretty well and makes good moves off the dribble.  He can bring the ball up the floor, which is very difficult for some bigs to guard.  He will be a good mis-match for a lot of teams . He plays with an attitude like he’s the best player on the court, each time he’s on the floor. He will look for his teammates and run the plays well.  As he continues to grow he will continue to develop.  He played very well in the event.

Isaiah is a really a solid guard.  He’s really quick.  There was a couple plays when he tripped himself up, after moving too fast, but overall he really contributes for DV.  He can hit the three, and keeps his man in front of him defensively.  It was difficult for guards to stay in front of him.  He sees the floor really well.  Has a really good handle of the ball.  He has a lot of upside on top of his style of play. He has a good stop-and-go, and can stop and pop on the spot.  He played well.

In a really good contest with Findlay Prep (NV), EJ stood out and showed his dog.  He didn’t score much, but he definitely stood his ground against some good guards.  He is a really good floor general. He he didn’t turn the ball over.  He was aggressive and got the ball where it was supposed to be.  DV was having a lot problems in the paint with the two 7-footers, but EJ proved he is one of the best guards in AZ.  He has a good basketball IQ, and is great at finding players and creating.  Not a bad shooter at all.  A really good defensive player.