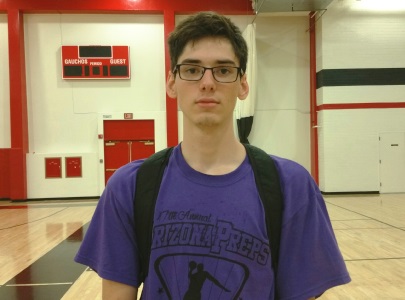 On October 24th, 2015, the 17th Annual Arizona Preps.com Fall Showcase took place at Glendale Community College in Glendale, Arizona.  This years’ event was very special due to the fact the Mitch Lightfoot, the consensus # 1 player in Arizona’s 2016 class, made his college selection, in which he chose the Kansas Jayhawks and head coach Bill Self.  We hope Mitch has set a trend among the elite players in the state to make their college announcements at our annual Arizona Preps.com Fall Showcase in the future.

There was many familiar and new faces in this showcase that me, and our Arizona Preps' staff observed very closely.  As a result, here are some of the top players that I personally observed on the day:

Bryce was one of the top 3 players that I saw on the day, and was able to do whatever on offense and defense as well.  A newly formed Texas-Rio Grande Valley commit, Cheney has a very solid shooting stoke that extends out to around 23 feet.  He also is very capable of hitting shots off of the dribble, as well as off of the catch very easily.  Cheney’s athleticism is still the best part of his game, as he uses it to get dunk after dunk, and score in transition in a half-court setting, where he knows how to use his athleticism to his advantage.  Defensively, Cheney was very active on the ball and used his quick hands and great frame to sit down in a defensive stance, and makes sure that he did not let the offensive player get past him, or go where they wanted on the court.  Look out for a huge senior campaign for Bryce, as he will put up monster numbers this season at Moon Valley High School.

Nigel was one of the most productive players on the day, regardless of class and position.  At 6-foot-8, Shadd knows how to use his height and physical stature to do what he wants to his defenders on the offensive end.  He also has great footwork and a set of solid post moves to maneuver and score around bigger and more athletic defenders.  He is also a very versatile big, in the sense than he can step out to 18-feet and consistently hit a shot, use his soft touch around the rim and score, or use his athletic ability to punish the basket and dunk with authority over players.  Shadd is also very active and involved on the offensive glass, and get more points this way as well.  The best part of Shadd’s game to me are his defensive abilities.  He has a quick twitch and is able to quickly get off of the floor - making it hard for offensive players to score over and around him.  Shadd is also a solid defensive rebounder and keeps the ball high once he has it in his possession, and then can start a fastbreak.  Shadd is one of the most elite players in Arizona’s 2017 class.  Look for him to put up huge numbers along with 2016 Liberty-commit, Brock Gardner.  Shadd currently has offers from Weber State, Northern Colorado, Texas- Rio Grande Valley, Grand Canyon University and Cal- State Fullerton.

Rogers was one of the sleeper prospects in Arizona’s 2016 class, but quickly burst onto the scene this weekend and was voted by our staff as the MVP of the 17th annual Arizona Preps.com Fall Showcase.  Rogers is a very big bodied guard who can get to the basket with ease, due to his quick first-step and ability to keep the defender on his hip.  He also thrives off of contact and converted at a high rate from the free throw line.  He shot the ball pretty consistently from three and mid-range in the two games he played in, but needs a little more work in this category.  Rogers has a very strong handle of the basketball as well, and likes to quickly get out in transition and get a quick score for him and his teammates, or slow down and set up the offense.  Also, he has solid court vision and a high basketball IQ for a combo guard - showing that he can play either position very comfortably.  He is laterally quick on the defensive end and had many steals during the event, due to his active hands and defensive awareness.  Also, he is pretty athletic for his size and won the dunk contest during the event.  Rogers currently lists interest from Air Force Academy and Dixie State, but look for his interest and offers to spike up in the near future.

Brendan was only was able to participate in one showcase game, but he left a huge impact on this year’s event.  After blowing up during the early and late evaluation periods in the summer, Rumel decided to end his recruitment early and verbal to Portland State University.  During his one game, Rumel got a lot done on both ends of the floor against fellow elite 2016 big Malik Ondigo. He displayed a very light touch around the basket, which he converted at a good rate.  He also used his physical size and strength down low to battle and fight - putting him in the best position to score the ball in the post.  Rumel also is fairly quick for a big his size, and was able to slide over into the right positions to record many blocks on the day.  He also fought very hard on both the offensive / defensive glass, and did end up with the ball in his hands on numerous occasions.  One thing that stood out to me about Brendan was his ability to draw his defender out to just inside the 3- point line and knock down jump shots.  A very polite and well-spoken player, Rumel is a great kid who will arguably be the best player in the city of Tucson this upcoming season, and hope I have the pleasure of seeing many more of his games this season.

Ondigo battled very well in his first game with Portland State commit, Brendan Rumel, and was extremely forceful in his second game on the day.  Ondigo is a very raw center whose overall offensive/ defensive game still seems to improve every time I am able to see him compete. He contains a very solid post game on the block and looks to be adding more weight and girth to his frame, which in return will make it easier for him to fight for position versus more athletic bigs.  His jump-hook is still the best move he has in his array of weapons and defenders have an issue stopping it due to his length and ability to find proper position in the post. Ondigo also has a very quick bounce off of the ground, and it does not take him much time to gather/ dunk the basketball once he has the ball in his hands.  Ondigo is always alert on the defensive end and blocked numerous shots that came his way during both games.  He currently holds offers from UTEP, Northern Arizona, Cal Poly and is gaining interest from Nebraska and Texas-San Antonio, with many more on the way as the season progresses for him.

Recruiting/ Notes:  2017 SF Seth Mason (pictured) of Skyline (Phoenix) Prep was one of the two best explosive athletes in the event.  He looks great in transition and is able to step out and knock down jump-shots from 23 feet and in, if or when he is left open.  He currently lists interest from Northern Arizona, Auburn, UC Santa Barbara and many others . . .

2018 PG Samir Bajwa from Calgary Alberta, Canada was one of the most steady floor generals on the day.  Bajwa was able to consistently know down open shots and had the ability to get by defenders with his shifty dribble and speed. He currently has interest from Princeton and Yale . . .

Coach Jack Daniels of Arizona Grassroots AAU program has many of the top juniors (2017) in the state on his team, and they all competed at a very good level this weekend . . .

Nathan Gorsuch, 2017 6-foot-1 PG from Pinnacle H.S. ( Arizona Power Black U16) was one of the fastest players during the weekend, and it was difficult for players to stay in front of him.  He also has a very clean, lefty shooting stroke that extended out to the 3-point line and knocked down at a high clip . . .

2018 6’7 SG Patrick Kelly of Pinnacle HS is a very, good looking prospect in Arizona.  Kelly is a long, lengthy wing who can knocked down shots from all over the court in his one game of competition.  He is also very athletic and finished many plays over defenders.  University of Portland and Sacramento State, and others have already inquired about his services . . .

2016 6-4 SG Nick Johnson is one of the best shooters in the state, and I look forward to seeing how he does this year for his Boulder Creek Jaguars club.  He currently holds an offer from Embry-Riddle University . . .

Former Oregon State assistant coach, John Saintigon, brought his Orange County Magic AAU program down from Los Angeles to compete in the showcase, and had two good looking prospects on his team in 5-11 Sr. PG Gage Shelmidine ( San Clemente HS) and 6-7 SG Luis Salgado (Foothills Christian HS).  Shelmidine was tough as nails in both games - forcing many steals, due to his great defensive ability, and had a very high basketball IQ on the offensive end - making the right play every time.  Salgado missed very few shots from 3 and mid-range on the day, and played with the most fire and heart that I saw all day long.