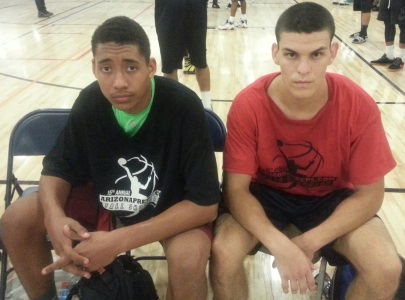 There was a strong showing by all the attendees this year at Anthony Ray’s 15th Annual Arizona Preps Fall Showcase.  Among the boys, the talent pool just keeps getting deeper as the annual showcase continues to grow.

My memorable standouts are highlighted below . . .

Dakota showed an extremely live body.  Whether it was running out in transition or grabbing rebounds over his opponents, he plays much bigger than 6-3.  He is an excellent finisher at the rim and has a knack for offensive putbacks.  His defense also keeps up with his offense.  He uses well-coached technique when playing defense, and pressures his opponents whether he’s guarding on the perimeter or in the paint.  He may traditionally play the guard position, but he has the strength and athleticism to play below the free-throw line, if need be.  It should be noted that his decision-making was also spot-on. He was a willing passer and an intelligent player.  He was both surprising and effective throughout the showcase.  Overall Grade: A

Deion James is a rising star in every sense of the word.  You could virtually see his confidence and his game growing throughout each of the day’s games. He is long, lean, and much stronger than he appears.  His length forces opponents to change shots in the lane, and his offense is almost automatic inside 8 feet of the hoop.  Areas of improvement for him, as for any tall player at this level, revolve around consistency on the perimeter.  However, he absolutely has range out to 20 feet.  Deion is a nightmare in transition, as he can get to the rim quickly for a bucket.  Deion stayed within the team and himself, and showed a little bit of everything.  If he continues on his path, he could very well become a high major prospect.   Overall Grade: A +

Joey Bankston should change his middle name to defense, defense, defense. Joey showed a lot of athleticism, a desire on defense, and was relentless in protecting the paint.  Among his blocked shots, he also showed good lateral movement when playing inside.  He has a quick first jump and extremely long arms.  A great combination for any player.  He rebounded at a high rate and was effective offensively.  He has limited range out to 12 -15 feet.  He could improve this with some work.  In the interior, he was confident and capable. His reach is outstanding and was exciting to watch in transition and on fast-breaks.  It should be mentioned that he has showed a lot of improvement from last year’s showcase - a positive sign for sure.  Overall Grade: A

Brian Brooks was literally turning heads at the showcase this year.  Without a doubt, he was the most gifted and naturally effective passer at the event.  His quickness was impressive to say the least, and the ball was virtual putty in his hands.  He had the basketball on a string and was never out of control. Throughout each game he was consistently looking to pass first, and then only taking on the offensive duties.  But don’t be fooled, he can get his buckets as well.  Whether on the fast break or after breaking down an opponent at the top of the key, Brian was repeatedly making great decisions like a true point guard should.  Some may overlook this kid because of his size, but he plays with heart and intelligence.  This was the best decision maker and the best true point guard at the event this year.  A surprising good finisher at the hoop as well.  Overall Grade: A +

Lyrik Shreiner was relentlessly effective.  If the rest of guys at the event were cruising on a V-6 motor, this kid was in a V-8 coupe.  Whether on offense or defense, he never stopped getting after his opponents or the rim.  He was consistently taking opponents off the dribble and into the paint where he finished strong.  On defense, the best way to describe him is active.  Many times when players look for steals, they stop moving their feet.  Not Lyrik.  He was in a hot pursuit of a turnover everytime he was pressing on defense, or on-ball against a perimeter player.  He was scary good in transition and was a rebounding machine.  He could have very easily averaged the most rebounds for his team throughout the showcase.  Lyrik is also much stronger than your average player at his age.  He did an excellent job of playing the hustle role while also scoring efficiently.  Overall Grade: A+