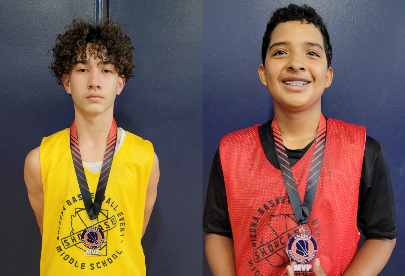 Arizona Basketball Events Director Michael Martinez organizes some of the top events with a large collection of talent in the Southern Arizona Area. Martinez organized a strong individual showcase at La Paloma Lakeside with some of the best talent in Southern Arizona. The prospects from the classes 2027, 2026 and 2025 participated in three games where the Arizona Preps' staff was able to scout and evaluate the upcoming talent.

I had the pleasure of knowing Coach Michael Martinez for nearly a decade, as we are colleagues. My old club teams have participated in his tournament events, and we coached against each other when I was an assistant at Casa Grande Union High School. Coach has been a staple in the Southern Arizona community, known for his community involvement in bringing affordable, first-class basketball events to Tucson - drawing in teams from all over Arizona, as well as neighboring states. Don’t let the price fool you, as his events are well organized and have high quality competition.

The Tucson greater area has a rich basketball history, since it is home to one of the top college basketball programs in the country. Southern Arizona is seeing growth in population, as well as basketball talent.

Here are the top performers from the SO AZ Elite Middle School Showcase presented by Arizona Basketball Events . . .

Kyree Harder - For only being a 6th grader, Harder impressed with his maturity and being calm in pressure situations. Harder is an excellent point guard prospect with impressive range, ball handling and facilitation ability. A nice prospect with tremendous upside.

Gabriel Coronado - Coronado is another hidden gem prospect. He is a shooting guard prospect with scoring ability from the mid and long range he is a problem for opposing defenses if left open. He impressed despite being a 6th grader and has a lot of upside.

Patrick Flores - A do it all prospect, excellent motor, vision and play making ability an elite talent with tremendous upside. Flores impressed with his high basketball IQ, defense, and scoring ability from all levels (long, mid and short range). Besides scoring he has fantastic vision, decision making and passing ability. If he continues to develop he has a high ceiling to be a stud at the next level.

Devin Dawson - Dawson is a physical forward prospect that runs the floor well that bullies defenders with his downhill scoring ability. Emerged as one of the top overall prospects in the showcase. He is strong and physical with a great motor and averaged a double double in scoring and rebounds every game. If he continues to develop he will be a solid prospect at the next level.

Luke Franco -  A nice wing prospect with great vision and handles also runs the floor well in transition. Franco has great motor and guard skills for his size. He will be a match up nightmare with his sneaky quickness and ability to leak out in transition.

Cameron Stone - Excellent guard skills for his size, vision, decision making and scoring ability. Stone can go and has a great platform to build on. He has tremendous potential and upside. I look forward to monitoring his progress.

Nate Campa - Campa is a nice guard prospect with good vision, handles and great defensive ability. He runs end to end with good energy and digs into playing defense.

Anthony Foley - Anthony Foley is a  nice wing-stretch 4 prospect that fills transition lanes well with great range. I was impressed with his mid-range and long range shooting. He displayed a nice ability to strike the iron when it’s hot, especially frustrating defenders if forgotten about and left open.

Jack Van Amburg -  Van Amburg is a great guard prospect with a high IQ and defensive ability. This kid can go. I liked his decision making and scoring ability. He plays fearlessly by getting into it on the defensive side of the ball. He makes the right plays and has tremendous upside.

Jackson Moore - Moore is a  solid point guard prospect with great IQ and facilitation ability. He does a great job in drawing in the defense and helping his teammates create scoring opportunities. He showed a good ability to hit open shots and finishes at the hoop well.

Jerry Mendoza - Mendoza is a do it all guard prospect with good IQ and finishing ability. He displayed good range with his ability to knock down mid and long range shots. Though he seemed like a quiet kid, his play made a lot of noise. He can quietly hurt opposing teams with his scoring ability and ability to create offensive opportunities for his teammates and himself.

Caleb Loomis -  Loomis is a sniper from long range who knows how to strike when the iron is hot and plays with great energy. He is a solid shooting guard prospect and runs the floor well. One of the better catch and shoot prospects of the showcase.

Jorge Perez - Perez is a scrappy guard prospect that has an excellent motor and runs the floor well on both ends, good finishing ability. I loved this young man’s energy as he seemed to turn heads with his hustle and playmaking ability. He will be a nice prospect if he continues to develop and play with the same enthusiasm and energy.

Silverio Rivera - Rivera is a high energy prospect who runs the floor well and is a pesky defender who gets under his opponents skin. He plays hard and it was nice to see him compete. I love his commitment on the defensive end.

Melvin Stubbs - Stubbs is a nice wing prospect who fills transition lanes well he has nice range, a slasher with good finishing ability. He has a great platform to build on as he has nice length and athleticism. Stubbs has great upside especially with his ability to finish strong in traffic.

Isaiah Peak - Peak is a nice wing prospect with an excellent motor and can score at all three ranges. He plays with good energy and isn’t afraid to pull the trigger. I like this young man’s confidence.

Jamahl McCraney -  A hidden gem prospect with great athleticism, length, and motor. If put into the right situation, McCraney could have a high ceiling as he has a solid foundation for his frame and athletic ability.

Trevon Harrison - A nice guard prospect with range, good vision and decision making. Harrison showed he can get buckets if forgotten about. I like his decision making as he seemed to make the right play at the right time everytime he was on the floor.

Xavier Grejada - A nice wing prospect who scraps for loose balls and rebounds. He is  sneaky quick to get 2nd and 3rd chance points and has nice slashing and finishing ability. A nice prospect with tremendous upside.

Cisco Llamas - Llamas is a crafty  prospect who slashes and facilitates well. He showed impressive finishing ability and high skill level. I love his willingness to play through contact. He was one of the top 8th grader prospects at the showcase.

Jamin Booker - Booker is  an athletic forward prospect with quickness, speed and has a lot of potential and upside. He has a great foundation to build on with his frame, speed, quickness and motor. I like his slashing ability and his on ball defense. He has a high ceiling.

David Baba - Baba is an athletic prospect with a nice frame and good length has a nice vertical. He has a great frame and fantastic athleticism. He is a nice guard prospect who has the ability to defend all 94 feet and runs transition lanes well.

Victor Romero - Romero is an athletic guard with nice athleticism and leaping ability and has a great motor on both ends. He is another highly athletic prospect who can guard 94 feet and displayed impressive leaping ability. If he continues to develop he will have a high ceiling.

It seemed the class of 2026 was loaded with prospects. After spending the entire day at the event, I must say these three prospects impressed me the most: Cisco Llamas, Patrick Flores, and Devin Dawson.

Flores and Llamas showed to be complete players, as they got it done on both ends of the floor. They are two highly skilled point guard prospects who defend well on and off the ball. Both can facilitate and have great ability to create offensive opportunities for themselves or their teammates. Despite being a class apart I would love to see them play against each other as it would be an epic match-up.

Dawson is one of my favorites as he is a traditional power forward. He has a good drop step and scoring ability inside. I would like to see him use his off hand more (right) however he just powered through the competition, with an abundant scoring display inside and cleaning the glass on both ends. He will be a match-up nightmare for opponents, because he just has his way on both ends.