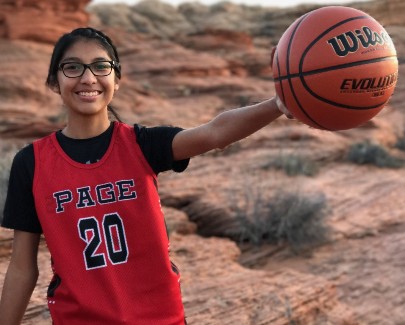 I love to see the lesser known smaller school competitors emerge as the season unfolds, and especially during this Covid-stricken season, and hits playoff mode.  Covid squashed many seasons before they got the chance to start. I’m curious to see who will step into the spotlight...

3A -  The 3A is REAL and likely going to be won by Page High School.  Page is pretty much the only school from the usually 3A dominating Northern Rez schools competing this year, because of the Covid-19 issues.  Page is well coached and very very tough to beat. Senior Torrance Begay and junior Miquedah Taliman (pictured) are both just under 6-feet tall, and lead their team in scoring.  Page is undefeated and has dispatched every team they’ve faced pretty convincingly.   Snowflake's junior Emily Davis leads Snowflake HS in scoring, and Snowflake is likely the other half of the Championship game, and found themselves bested by roughly a 20-piece when they last met.  Snowflake is gonna have to make it by a very tough Winslow or Holbrook team to see the championship game.  I could see Thatcher grinding their way to the semis', but that’s where I see their road ending.  Page is my pick for the 3A ship this year and likely doing so in dominating fashion.

2A - Pima is atop the 2A Division and will finish that way.  With (4) players averaging double-digit scoring and a few others just south of that, they’re not easy to gameplan for.  St John’s has been tough and could surprise us in these playoffs.  Arizona Lutheran has a solid record and is carrying the #2 seed, however they’re gonna likely have to battle out with a very tough Valley Lutheran squad.  If there’s any surprises in the 2A playoffs, I think it could be Valley Lutheran making the push and giving Pima a scare.

1A - This one is gonna be a championship match-up between two teams coached by two of my favorite coaches - Leading Edge Academy Gilbert (Erik Gray) vs Ft Thomas (Lee Haws).  Coach Gray has a solid program in place and keeps on reloading his team.  They’re a dominant force in the small school's pool of ladies hoops.  Coach Haws has turned his team into a force - dominating every team they’ve faced, with exception to their loss to Leading Edge Academy and Pima (2A).  I will be attending this match-up for sure!  St. Michael played Ft Thomas tough and would be the best possible third option to make a run.