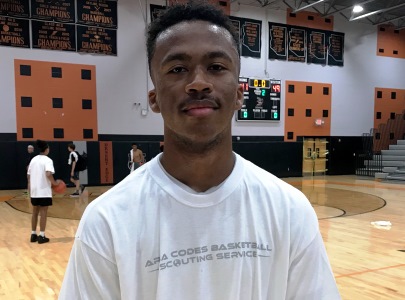 It is easy to forget this season that as we entered the Division-II State Playoffs for the Canyon Athletic Association (CAA), Skyline Prep High School, which lost a lot to graduation last season, entered this year's state playoffs as the two-time defending State Champions.

After winning their second-consecutive state championship last season, the program graduated key members to last season's team and former successful and hard-working Head Coach Jace Romero left the program to pursue other endeavors.  The program returned this season with a completely new lineup and a new leader, as former New York basketball legend and former Villanova standout Jason Fraser took over the program.  Fraser inherited a lot of work to get this year's Skyline team to even win basketball games, and after a long season of teaching and player development, Fraser and his team entered the CAA State Playoffs as a #14 seed.

On Tuesday evening, Skyline Prep would face their sister program, AZ Compass Prep, the #6 seed.  Many basketball enthusiasts in the state know AZ Compass Prep for their National Team, but the high school program at the school was once undefeated late in the season, before dropping several games as of late.  Led by Head Coach Pete Caffey, the team came into Tuesday night's match-up as the clear favorite in the playoff game, but the Skyline team would have a different mindset - looking to avenge a previous loss to AZ Compass during the season.

After a very close and competitive first half, Skyline would hold on to a narrow 22-21 lead at halftime over Compass.  Compass 6-foot senior point guard Shane Van Huizen would collect (4) personal fouls in the first half, which would hurt his team, as they would begin the third period without their point guard on the floor.

As a result, Skyline would come out aggressive in the second half behind the strong play of 5-foot-9 senior guard James Scott.  Scott would drive hard to the basket early in the second half, scoring on consecutive drives to give Skyline a 25-21 lead.

After a steal and a nice throw down on the break by gifted sophomore guard Rai'Shun Wilson, Compass would take back the lead with 3:45 left to play in the third period, 26-25, after an offensive rebound and put-back by 5-foot-10 senior guard Deveraux Roberts.

In the fourth period, Compass would come out firing, and would convert consecutive three-pointers to narrow the gap, 35-33, as Deveraux Roberts and Shane Van Huizen would connect on shots.

But, once again, Skyline Prep would not lay down or give any signs of relinquishing their lead, and would go on a big 13-2 run over the next (3) minutes of action to close out the contest, and build a big lead late - putting the game out of reach, 63-51.  In the final seconds of the game, Skyline would end the contest with back-to-back dunks by seniors Desmond Dawson and James Scott.

Skyline would get the big win 67-51 over their rival and sister program, AZ Compass - a big win and accomplishment for the Skyline program and Head Coach Jason Fraser.  Skyline will now move on to face Tri-City Christian in the CAA Semi-finals this Saturday (2/16) @ Salt River High School.

In the second game of the evening, #1 top seed Eduprize faced off with Imagine Prep.  Eduprize HS has been terrific this high school season, and has literally dominated their competition in the state all season long.  This game would be no different, as Eduprize would storm out to a big 14-0 advantage in the first period of the game.  Led by the play of 6-foot-5 senior wing DJ Hawkins (pictured) in the first half, Hawkins would explode for 18 points in the game's first period.  Hawkin's outburst would put the game out of reach for Imagine Prep, as they would trail for the entire contest, only to lose the game, 68-40.

Eduprize will now advance to the CAA State Semi-Finals where they will face #4 seeded San Tan on Saturday (2/16) at Salt River High School.

Scouting Notes:  Skyline Prep is very talented as a team.  While small and not possessing much size in their lineup, the combination of senior guards Jzhan Tavyon, James Scott and Desmond Dawson is a formidable group of quick and talented gaurds.  Tavyon is a skilled guard prospect with a nice shooting stroke and a strong handle of the basketball.  He is able to create shots for himself and can make plays.  At 6-foot-1, he has good size for the point guard position, but he is much more of a combo-guard.  A good overall sleeper prospect for a smaller college program.  Both Scott and Dawson are quick and skilled guard prospects that can defend and create off the dribble.  I like both of these young men, and both are worthy of playing at a local junior college program next season.

AZ Compass Prep 5-foot-10 senior guard Shane Van Huizen had a very good senior season for AZ Compass Prep, and is one of the better unheralded guard prospects in the state.  A very good sleeper prospect for a smaller college program, Van Huizen is a very skilled point guard prospect with a good feel for the game.  He has a pure shooting stroke with range on his shot, and is able to make plays for himself and others off the dribble.  He has very good potential over time and should blossom in the right college program.

Imagine Prep has a bright future ahead of them, as a result of their sophomore duo of 6-foot-6 sophomore post Latrell Barker and 6-foot-5 sophomore wing Isaiah Broady.  Barker is a strong and well-built post player that has very good potential for the future as he matures physically.  He is still raw offensively, but he has strong broad shoulders and is an active rebounder and shot-blocker.  He possesses a good jump hook now, and as he develops footwork and a more advanced skillset, he will develop into an intriguing college prospect.  Broady did not play in the contest on Tuesday evening (disciplinary), but he is a nice talent as well.  Broady is a long and skilled wing prospect with good size and length, that should develop really well over the next two years, as he possesses very good upside for the future.