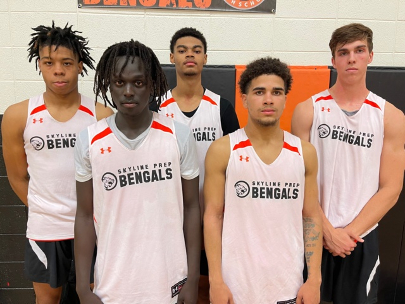 It has been a long time coming for the Skyline Prep basketball program, as the program has desired for some time to build a National Team that can compete against the best prep programs in the West. The time has finally come for the sister program of top-rated national program AZ Compass Prep to take center stage and produce their own level of college basketball prospects - giving the state of Arizona another gifted basketball program for college programs to follow.

While several other coaches at the program had looked to help lead the Skyline Prep program to new heights, new Director of Operations Chris Diaz, who is also a successful assistant coach at South Mountain Junior College, and Head Coach Howard Thomas have made it happen. A native of New York and a basketball aficionado, Thomas spent numerous years at very successful Hillcrest Prep, before now leading the Skyline Prep program. Diaz and Thomas have put together a fine coaching staff, which also includes former Desert Vista High School Head Coach Tony Darden and one of the state's best basketball trainers and coaches, Lawrence Taylor Jr.

The program is set to take off this fall and has already began competition for their National Team this season. The program will also still have an Open CAA Division (Canyon Athletic Association) team as well.

Locus is a very nice looking talent with excellent size and length. He is a sure-fire Division-I prospect, as he has very good size and a strong rangy frame. He has a good overall skill level and is able to make plays for himself with the basketball in his hands. He is a good shooter with some range on his shot, and is also able to take defenders off the dribble and finish at the rim and from mid-range. He is a good ball handler and is skilled in the open floor. A big-time dunker. A good slasher and finisher at the rim. Has a solid mid-range game, which I would like to see him continue to develop. An active rebounder. A solid defender. A big-time sleeper prospect really that has a chance to be really good with continued hard work.

Kwat is an intriguing prospect with a nice all-around skill level that allows him to play both guard positions on the court. A left-hander, Kwat competes at a high level on both ends of the floor and plays with a purpose. Has good overall versatility as a player, and is able to make plays with the basketball in his hands or off the ball, where he moves well without the basketball and simply is a playmaker. A good shooter with range on his shot. A very unselfish prospect that sees the floor well and enjoys finding the open man on the floor. A strong driver and finisher in the lane. Can create his own shot. A strong and active rebounder and defender that plays passing lanes. A capable lock-down defender with more focus in this area. Another nice sleeper prospect for a college program.

Langston is a big-time sleeper prospect as well that many college coaches need to see soon and take a very hard look at. West Virginia was in attendance for one of his games and has expressed interest in the rangy and talented wing prospect. Langston is a pure shooter of the basketball with a nice left-handed stroke that looks like it is going in almost every time. He has excellent range on his shot and shoots it at a high release point. He is a strong driver and finisher as well, and can also create his own shot off the dribble quite well, as a result of his extreme size and length. A good ball handler and sees the floor as a passer. An active rebounder. A solid defender. Has nice upside as a player.

The point man for this year's ballclub. McBath is a strong and physical guard prospect with good overall toughness and athleticism. A floor general that likes to set the table for his teammates. A strong ball handler that sees the floor well and pushes the basketball. A good mid-range shooter that needs to add consistency from longer ranges to maximize his potential as a college prospect. A strong driver and finisher in the lane, and in the open floor. A very good on-the-ball defender that possesses quick hands and feet. Has promise.

Michel is another nice find on this year's team. A native of Nevada, Michel has moved to the state of Arizona this fall, and is a serious talent with a fundamentally sound package of goods that allows him to score inside and out effectively. He has a pure shooting stroke with nice range and also has good low-post skills that allows him to make plays around the basket and at the rim. Michel can stretch the defense with regularity, which open up his strong drives to the basket and mid-range scoring opportunities. A strong finisher at the rim and in the open court, where he is a strong dunker of the basketball. A strong and active rebounder that keeps balls alive and competes hard on both ends of the floor. Runs the floor hard. Competes hard with good work ethic. A very nice sleeper prospect as well, as this team is filled with them. A mid-major talent.

It will be very exciting to watch this team this prep season, as they look to make an immediate impact on the prep circuit.