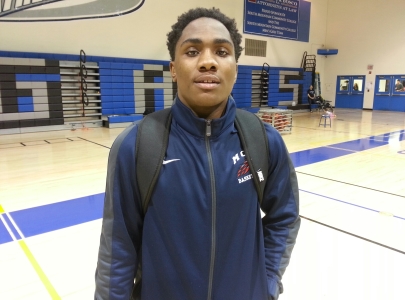 Mesa Junior College (6-2, 5-0) is off to a great start this junior college season - winning their last 5 games in a row on the season and posting some very good perf0rmances already as a result.  Led by the overall play this season of gifted 6-foot sophomore point guard Shy McClelland, the Thunderbirds are rolling and looking to win the conference this season.

They will definitely have their work cut out for them if they are to finish as the top team in the ACCAC when it is all said and done, but, behind the play of McClelland this season, it will be definitely possible.

A native of Milwaukee, Wisconsin, where he attended Northwest Secondary High School, McClelland is a big-time talent at the guard spot and is among the most gifted overall prospects in the conference this season.  Possessing a strong handle of the basketball and also a nice physical frame, combined with excellent quickness and an ability to make players around him better, McClelland has quickly developed into one of the top junior college point guard prospects in the country.

I caught up with McClelland after his team's big win over South Mountain Junior College on Tuesday evening, and he advised me that, while he is hearing from many division-I college programs currently for his services, he currently has two leaders in his college recruitment.

McClelland told me that he currently likes Marquette and Miami, as his two favorites at this point early on in his recruiting process.

"I really like Marquette," McClelland told me after the game - a game in which he posted a game-high 25 points and 5 assists.  "Coach (Buzz) Williams has been recruiting me for a long time.  We are really close."

McClelland told me that he plans to make his college decision just before the late signing period in April.

McClelland also advised me that he is on pace to graduate this season from MCC.

Arizona Preps will continue to folow the recruitment of McClelland throughout the remainder of the junior college season, and bring you any updates as they continue to develop.