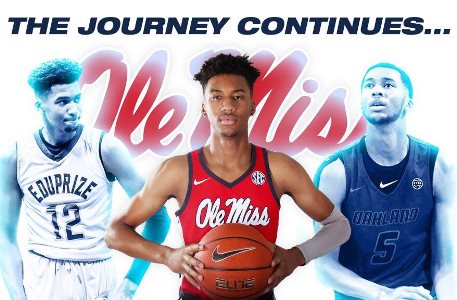 This week when top-rated national 2020 college prospect 6-foot-10 rising senior post prospect Shon Robinson decided to change recruiting classes, jumping from the 2019 to the 2020 Class, it was big news nationally. Instead of suiting up this high school season for Eduprize High School, in what would have been his final season of high school, Robinson instead chose to enter the collegiate ranks early and will become a freshman this season for Ole Miss.

Robinson was considered among the elite overall basketball prospects in Arizona's 2020 Class, and also one of the top overall prospects in the country, so when he gave an early verbal pledge to Ole Miss in March, it came as a major surprise to basketball scouts and media nationally, as Robinson was being recruited by many high-level programs in the country. While it was a major surprise for Robinson to elect for Ole Miss early in the recruiting process, it comes as an even bigger surprise that Robinson will now also leave the high school ranks a year early and now suit up for a college program.

With each of these big offers for himself on the table, Robinson decided to end his college recruitment early, and elect for Ole Miss and his close personal relationship with Watkins, over the lure to play for a much more prominent high-major division-I college program. This same relationship, no doubt, also had a lot to do with Robinson's decision to enter the college ranks early.

Robinson has worked hard since the end to the high school season to develop his body and prepare himself for the next level, but it is difficult to prepare for the SEC Conference, after playing in Arizona's charter school league. It will definitely be an adjustment for Robinson to make to prepare himself for the rigors of college basketball, but he definitely has the size and overall skill level essential for being successful at the high-major division-I basketball level.

This past season, Robinson and his Eduprize teammates had an excellent 2018-2019 season - winning this year's Division-I CAA State Championship.  Robinson was the best overall player and talent in the CAA ranks last season, and now he will need to make another name for himself now in college basketball, but the future for Robinson looks extremely bright.

Robinson's commitment and decision to attend Ole Miss early puts a capping end to an excellent junior season for himself and his Head Coach Phil Lowe, who was responsible for helping bring Robinson to the state of Arizona more than a year ago from Chicago, Illinois, where he played as a freshman for Morgan Park High School (IL).  He moved to the state of Arizona for his sophomore season, where he played for Higley HS, before transferring to Eduprize as a junior.

Robinson is a tremendous talent and will only continue to develop over time as he physically matures.  He is still growing a great deal physically, and has loads of upside for the future.

Arizona's 2020 class, which was once absolutely loaded with top-rated national talent, now has taken a significant hit as Robinson and Bella Vista's Addison Patterson (University of Oregon) have both decided to change to the 2019 Class. Hillcrest Prep's Kyree Walker has also considered such a move as well, but currently Walker has not indicated that he will go to college, but looks to be staying put at Hillcrest for his senior season.

Arizona Hoop Review Scouting Report:  Robinson is a long, and lengthy combo-forward/post prospect that likes to play on the perimeter much more than he does in the post, but he is able to do so through a variety of offensive skillsets.  He has very good versatility as a player and is capable of scoring inside and out. He has a nice shooting stroke with range on his shot, and a quick release that allows him to make shots from the perimeter with ease.  He also has good low-post footwork, combined with a variety of low-post moves and a good jump hook.  He runs the floor hard and is a good finisher in transition.  Robinson's length allows him to block/change shots consistently on the defensive end.  He is also very active on the floor, which allows him to impact shots anywhere near the paint, while also allowing him to rebound outside of his area on the floor.  An active rebounder.  A good ball handler for his size.  A good passer that sees the floor and pushes the basketball on outlets.  An ultra-talented prospect with a bright future ahead of himself.