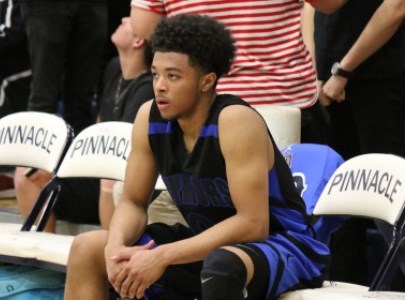 Two of the state's top overall prospects, while both being committed to college programs, will now have to mull over their recruiting options after the head coaches from both of their future respective college programs have left.  With their future college programs in limbo, Shadow Mountain's 6-foot-1 senior point guard Marcus Shaver (pictured) and Apollo High School's 6-foot-1 senior point guard Holland "Boo Boo' Woods will now think things over before making their final college decision.

Marcus Shaver (UC-Santa Barbara signee) is one Arizona prospect that many local basketball enthusiasts this high school season believed could have went to a much higher college program.  Shaver gave an early verbal commitment to UC-Santa Barbara this fall, after moving back to the state of Arizona from Texas.  Shaver played his freshman and sophomore seasons at St. Mary's High School, before leaving the state to transfer high schools.

UC-Santa Barbara long-time head coach Bob Williams may retire as the school's all-time winningest men's basketball coach after 19 seasons.  The school did not choose to extend Williams' contract recently, so Williams will not be back next season for UCSB.  As a result, Shaver could request to get out of his national letter of intent and re-open his college recruitment.  It is still unclear as to what he will elect to do, but Shaver would be a definite hot prospect for college programs in pursuit of a high-powered division-I guard prospect.  Shaver is a big-time athletic talent with a superb skillset.

With the firing of Geving at Portland State, look for Woods to look elsewhere, unless Coburn is kept on under the new staff, which he definitely should be, as he has been the key to the program's recruitment of many of their players.

If Woods decides to re-open his college recruitment, it would get very interesting for Woods, as more college jobs open up and are taken by new head coaches; each of whom will be looking for top-rated talent still available.

With many college coaches looking for players this spring, Shaver and Woods could become two of the hottest guard prospects out there, but it is still unclear as to what each prospect will do.

I will continue to follow the recruitment of these two prospects closely, and bring you any updates as they continue to develop.

Recruiting Notes:  Memphis University player and former Shadow Mountain High School 2015 graduate Craig Randall has decided to transfer schools after playing for the program for the past two seasons.  As a sophomore this past season, Randall played in 24 games during the season - starting five times.  He averaged 2.2 points and 1.3 rebounds per game for the season.

Randall is an athletic combo-guard prospect with good size and length.  A transfer to a good mid-major program would suit him nicely.  Randall was recruited by former head coach Josh Pastner at Memphis, but played for new head coach Tubby Smith after Pastner took the Georgia Tech job last summer.