Shaun Wahlstrom Narrows Down To Four 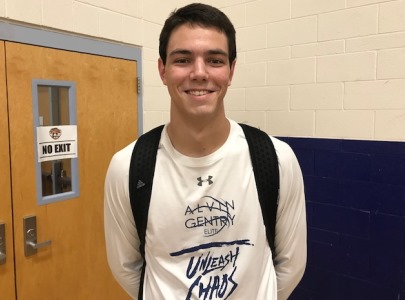 Another prospect in the state that is coming off a strong spring and summer performance for himself, saw his college recruitment really take off this club season.  As a result, Estrella Foothills' 6-foot-8, 210-pound talented post Shaun Wahlstrom has now trimmed down his list of college suitors to four schools.

Wahlstrom is coming off an excellent showing for himself this club season, after traveling the country with his Alvin Gentry Elite program.  The team was talented and won a lot of games on the circuit, and Wahlstrom played very well for himself - rebounding hard, finishing strong around the rim and showing very good versatility on the perimeter.  His tough, hard-nosed play helped Wahlstrom land loads of recruiting interest for himself.

This weekend, Wahlstrom decided to trim his list in preparation for the early fall signing period, where he will look to make his decision.  Wahlstrom decided to narrow down his schools to Northern Arizona, Arizona Christian University, Masters College and Central Washington.

While Wahlstrom has not indicated a leader in his college recruitment, it should be tough for his other (3) schools to beat out Northern Arizona.  While it is the biggest school recruiting him, it is also a good level for Wahlstrom, who I believe is well under recruited.

Wahlstrom had a breakout year last high school season.  While playing next to Sacramento State-commit Grant Greabell, he was a driving force behind an Estrella team that went 21-7, and went to the 4A State playoffs before losing to eventual state-champion, Shadow Mountain.

As a sophomore at Verrado HS, Wahlstrom helped lead his program to a 17-10 overall record on the season in the state's 5A Division, and was the driving force for that program as well, before deciding to transfer high schools as a junior.

Wahlstrom is big and skilled and can score either with his back to the basket, or from the perimeter where he likes to set up defenders with a nice mid-range jump shot.  He is also a good low-post scorer with good overall footwork, and is able to take the basketball strong to the basket and also finish strong at the rim.  He is a good recruiting target that is considered a sleeper prospect in the state's talented 2019 Class.

I will continue to follow his recruitment closely this spring and bring you any updates as they continue to develop.

Arizona Hoop Review Scouting Report:  Wahlstrom is a unique prospect in the state's 2019 Class, as he is a big and skilled forward prospect that can score either with his back to the basket, or from the perimeter where he likes to set up defenders with a nice mid-range jump shot.  He is also a good low-post scorer with good overall footwork, and is able to take the basketball strong to the basket and also finish strong at the rim.  A strong two-handed dunker.  He is a very good offensive rebounder and is able to start the fastbreak wth good outlet passes, and then able to run the floor hard.  He does not mid physical contact and is a strong finisher inside the paint, where he is able to get to the free-throw line quite often.  A very good sleeper prospect that will develop nicely over time for a college program.