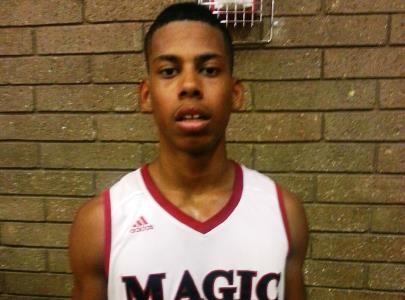 After a rocky start to the high school season for Peoria High School, the team has really picked it up as of late.  The Peoria program started off with a dismal 1-5 record - losing 5 of their first 6 games on the season.  This past weekend Peoria, a team filled with athletic talent, put it all together - winning the Horizon Invitational.

A major bright spot for Peoria HS this season has been 5-foot-11 senior combo-guard Brody Sharkey.  Sharkey has averaged a team-high 20.6 points per/game this season, and was selected last week as the Tournament Most Valuable Player at the Horizon Invitational.  Sharkey earned the honor after pouring in 20+ popints in each victory and a game-high 24 points in the championship game.

Sharkey is among the best pure individual talents in Arizona's 2014 class.  While being a lesser known recruiting target, the athletically gifted guard prospect is a nice talent for a smaller college program.  He is a big-time scorer with excellent energy and bounce on the floor.  He has a nice handle of the basketball and a good shooting stroke off the dribble - capable of scoring the basketball at a high rate.  While his shot selection can be questionable at times, he has really developed in this area of his game.  As he continues to develop his ability to make plays for others, and make players around him better, he will see his overall game develop as well.

Sharkey is among the best unsigned guard prospects in the state, and should begin to receive serious recruiting attention this spring.  Currently, such programs as Houston Baptist, Texas Pan-American and Minnesota-Duluth have expressed serious interest in the talented guard prospect.

Look for Sharkey to continue his strong play this season - providing Peoria HS with an opportunity to be in every game this season.