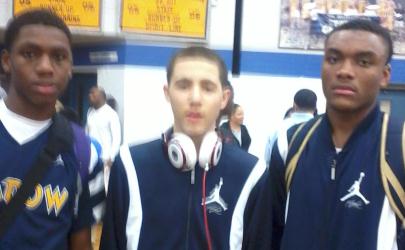 Thursday, December 6th I went to see the Paradise Valley Trojans versus the Shadow Mountain Matadors.  It was a great atmosphere as former NBA players Mark West, Mike Bibby and Eddie House each supported their family members - plus Channel 3 sports was covering the game.

Paradise Valley got off to a quick 9 to 1 start as 6-6 senior SG Paul Watson (Fresno State signee) had 4 early points.

The 2nd quarter started with and a defensive battle, as 6-foot-3 freshman forward Carlos Johnson had 2 monster blocks and Paul Watson also had 3 blocks for himself.

Shadow's 6-foot-7 senior post C Tyler Lehew came off the bench with 5 quick points to spark a 15 to 5 run.  5-foot-11 freshman Mike Bibby Jr also hit a deep 3-ball in that run to give the Matadors a 24 to 17 lead.  Bibby also threw an amazing pass to 6-foot-2 freshman wing JJ Rhymes from almost half-court - resulting in two free-throw attempts.

Half-time score was 26 to 19 in Shadow Mountain's favor.  PV 6-foot-5 senior forward Ryan Finley had a team-high 7 points in the half, while Keegan Hansen had 6 points for Shadow Mountain.

A quicker pace in the 3rd quarter started with some quick plays by Paul Watson - gliding to the hole 3 plays in a row to cut the lead 27 to 26 for SM. Then 3 free-throws by Keegan Hansen, as he got fouled on a 3-point attempt to go back up to 4.

Watson would score immediately on the next possession, while JJ Rhymes would also score again for Shadow.

Rhymes caused havoc on defense against Paul Watson, and Bibby just knows how to run an offense and makes the correct plays.  His IQ is extremely high and plays at the controlled pace for a true PG.

The 3rd quarter ended with the score 34 to 31 - Shadow Mountain with the narrow lead.

The fourth period started with a beautiful pass from Keegan Hansen to Bibby in the corner for a 3-pointer.   Then a fast break dunk by Tyler Lehew had the SM crowd going wild.

Paul Watson immediately goes to work on the next possession to get an “and-1” for a 41 to 35 Shadow Mountain lead with 5 minutes left in the game.

The pace quickened again and Watson pulled from deep to hit a 3-pointer to cut it back to a 43 to 38 SM lead.  JJ Rhymes scored on back-to-back floaters and then Watson again hit 1-of-2 free-throws for a 47 to 41 lead for SM with 3 minutes left to play.

The game was getting very intense for both teams and the crowd was having fun watching this slugfest.  Shadow Mountain attempted to run out the clock, but Carlos Johnson saw an opening and was fouled with 1 minute and 33 seconds left to play.  Johnson would convert 1-of-2 free-throws, but Shadow would get a huge rebound, get fouled again and make 1 more free-throw.

On the next possession Watson hit a deep three to cut it to a 49 to 44 SM lead with 1 minute left.

Keegan Hansen would finish the win off for Shadow - making 3-of-4 free-throws down the stretch and giving Shadow the 53-47 victory.

Paul Watson ended the game with a game-high 25 points, while Anthony Walker had 11 points and Ryan Finley finished with 9 for PV.

Shadow Mountain had a very balanced attack of 5 players.  Hansen finished with a team-high 14 points, JJ Rhymes had 11 points and Mike Bibby and Tyler Lehew had 7 each.