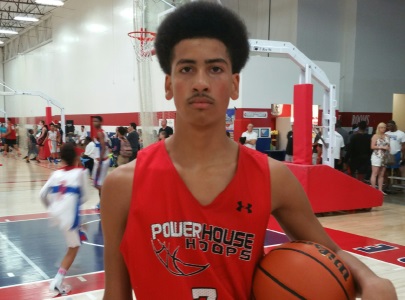 On Wednesday evening at this year's exciting McClintock Holiday Shootout, as expected, top-ranked Shadow Mountain  improved their undefeated record on the season - advancing to the tournament's championship game after a 77-57 victory over a talented Chandler team.  In the final game of the evening, Hamilton, led by head coach Doug Harris and his staff, were able to squeak past Brophy Prep on a last second shot, 46-44.

Shadow Mountain (15-0) has been the class of this year's event and also of the high school season, as the Matadors have displayed a toughness and level of confidence as a team not seen by anyone else in Arizona.  While other teams are talented, this group of student-athletes possesses a rare quality - superior toughness and confidence as a team.  Such swag starts and comes from head coach Mike Bibby and his staff.  Bibby was an NBA star guard for 14 seasons, and was the top Arizona basketball product ever to to come from the state - selected as the #2 overall pick in the 1998 NBA draft.  Bibby and his staff have instilled a level of toughness into their team that is desired by any coach, at any level.  As a result, Shadow Mountain is on cruise control right now and playing at a very high level.  I predict they will not lose a game this high school season.

On Wednesday evening, Shadow Mountain faced a Chandler team that is playing their best basketball of the season.  Chandler would hang in this one early, behind the superb play of star 6-foot-6 junior wing Tevian Jones, but would eventually fail to keep pace with the Matadors, as they would take over late in the first half, and jump out to a big alftime lead.

Tevian Jones would keep Chandler close early - making (4) three-pointers in the first half and tieing the score at 18 all.  But Shadow Mountain would answer every time with a different player producing.

After a three-pointer by 6-foot-3 senior guard Marcus Shaver (UC-Santa Barbara signee) and a three-point play from 6-foot-1 sophomore guard Jovan Blacksher, Shadow would take a 24-18 lead in the second period.  After another nice step-back jump-shot from Tevian Jones, Blacksher would score again, before another driving layup after a foul by Marcus Shaver.

Shadow Mountain would push their halftime lead to 16 points over Chandler, 39-23, and never look back in the game - winning the contest 77-57.

Shadow Mountain will face Hamilton in the tournament's final game on Thursday evening.  Hamilton (12-3) played a very good game against a well-coached Brophy Prep team on Wednesday, finally defeating Brophy on a last second shot just before the buzzer.  But they would have to come from behind to do it.

In the win, Hamilton would overcome a big, early lead by Brophy Prep.  Brophy (8-3) would jump out very fast and early - taking a huge 15 to 2 lead in the first period, behind 7 points from 6-foot-5 senior forward Matt Kempton.

This contest was a serious defensive match-up and a low-scoring affair.  Hamilton would outscore Brophy 13 to 5 in the game's second period, but Brophy would hold on to a 20-15 lead at the half, behind some sharp shooting from 6-foot-6 junior wing Jaxson Baker (8 points in first half).

In the third period, consecutive baskets by 6-foot-5 junior guard/forward Rashad Smith (pictured) would tie the game at 27 all, and keep the game very tight.

With :35 seconds left to play, 6-foot-6 junior post Zach Anderson would knock down a nice mid-range jump-shot to put Hamilton ahead, 44-42, but Matt Kempton would tie the game again, after a spinning move in the lane.

After a timeout called by Hamilton with 2.7 seconds left to play, Rashad Smith would inbound the basketball to a cutting teammate, 6-foot-2 senior guard Chance Brewington.  Brewington would layup the basketball in over a defender just before the buzzer sounded - giving Hamilton the big 46-44 victory.

Hamilton was led by Rashad Smith with 14 points in the win, while Matt Kempton finished with a game-high 16 points for Brophy Prep.