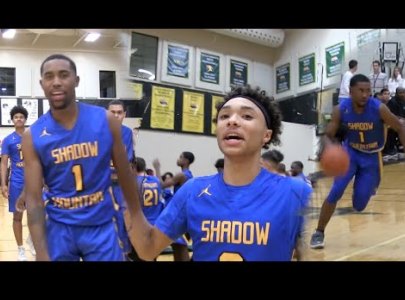 The annual Hoophall West event held this week in Scottsdale @ Chaparral High School was tremendous and finally came to a close on Saturday with loads of basketball action, as there were (2) different sessions for basketball media, scouts, college coaches and fans to enjoy.  There were numerous top-rated teams and players in competition on Saturday, and the event would raise the level of exposure on the day, as numerous high-level match-ups filled the schedule.

Shadow Mountain and Pinnacle High School recently played in the one of the most anticipated match-ups in the state of Arizona's history in an early-season match-up, and these two programs would become the pride of Arizona in this week's Hoophall event.  While the event featured some serious out-of-state opposition, the Pinnacle and Shadow Mountain programs made our state proud as they both turned in the best performances of the event.

First, Pinnacle (7-2) defeated a talented San Jaoquin Memorial High School (CA) team, which featured one of the nation's premier junior prospects in Jalen Green.  Pinnacle would come up short against Rancho Christian HS (CA) in the event on Saturday, despite a game-high 33 points from star senior guard Nico Mannion.  Rancho Christian's dynamic and amazing duo of 6-foot-10, 220-pound senior forward Isaiah Mobley and national top-rated elite 7-foot, 200-pound post prospect Evan Mobley would be too much for a very game Pinnacle High School team.  The Mobley brothers put on a show in their nice win over Pinnacle on Saturday.

Shadow Mountain Mountain (5-1), after falling to Pinnacle earlier this season, has returned to their usual form.  After a blowout win on Friday evening over an over matched, but young St. Mary's team 86-60, Shadow Mountain would turn in a big win of their own on Saturday evening in the final game of the event - defeating an historic Simeon High School (IL) program, 80-67.  Metaphorically, the contest was similar to that of two middleweights in boxing fighting with similar fighting styles and absolutely going at it, the entire bout.

Shadow Mountain and Simeon would connect on many blows throughout the fight, and would compete at a high level on both ends of the floor for the entire game - displaying serious toughness and intensity throughout the contest.  While the shot selection would be questionable at times, as both teams raced up the floor looking to get it back after a score or an attempted score by their opponent.  Shadow Mountain would outlast Simeon in the end behind a strong performance from their usual suspects, senior guards Jaelen House (Arizona State signee) and Javon Blacksher (Grand Canyon signee) and relentless junior forward Shamar Morrow.

Shadow Mountain is and has been the state's elite program in Arizona for some time, and they proved why again in this weekend's event, as their team is tough and talented.  While they lack size, they will get a nice shot in the arm next month when 6-foot-10, 250-pound senior Malik Lamin is cleared for action.  The addition of Lamin will make this team very formidable, and will have them in contention this season to have another chance to win it all nationally in the Dick's Sporting Goods' event at the conclusion of the season.

Notes: Perry High School (6-3) is off to a much slower start to the season than expected.  While believed one of the most serious threats to Pinnacle High School's chances of repeating as 6A State Champions before the season, Perry has struggled somewhat this season without the services of talented 6-foot-4 senior guard Jalen Williams (Santa Clara signee) who has been injured and has missed numerous game this early season.  Without Williams stretching the floor and the defense with his  long range abilities, the big Perry team has lacked some continuity and shooting, which has caused them to be less effective around the paint.

Perry has lost a couple close games early in the season in Arizona, but they would fall by their biggest margin on Saturday, 70-47, to Modesto Christian HS (CA) in a 23-point defeat.

Without the services of Williams, Perry veteran Head Coach Sam Duane Jr. will need to make some adjustments quickly to get Perry back to form, as Perry will travel to face a red-hot Chaparral team on Tuesday.

Overall, the Hoop Hall West event has developed into an amazing annual venue for our state's basketball fans, scouts and media and scouts and media abroad to mark on their annual calendars.  This event is quickly bringing a lot of respect to the state, as annually our best teams are featured against top-rated regional and national teams, which has done wonders for some of our top-rated prospects.  This year's event though was definitely the best one of all, as it featured such elite national prospects Jalen Green, Evan Mobley, Nico Mannion and, of course, Lamelo Ball.  The crowds for the games each night were tremendous and the large amount of quality media coverage was a sight rarely seen in high school basketball in the state.

The state of Arizona can only continue to benefit greatly from having such top-rated teams and prospects showcased in this annual collection of talent. As the state's level of basketball talent continues to grow, this event will also continue to grow.  We need more events like this one to help continue to raise the overall level of basketball in Arizona, and I am thankful that the Hoophall West event had the foresight to bring their program to our state.