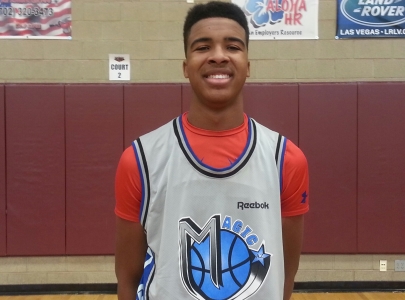 The top remainning recruiting target in Arizona's 2017 senior class was Tri-City Christian's 6-foot-8 senior post Nigel Shadd.  As a result, Shadd was just beginning to generate much more recruiting interest for himself, but now Shadd is off the recruiting board likes a few of his other classmates - giving a big verbal commitment to Kansas State University just after his recruiting visit to the program.

After taking an official recruiting visit to Kansas State last weekend, his first official visit, Shadd decided to pull the trigger with the Big-12 college program.

Shad received an offer from K-State during the summer in June.  Shadd had also scheduled a recruiting visit to the University of Nevada, and eventually chose Kansas State over Nevada, Virginia Commonwealth (VCU) and Pacific University.

Shadd is among the top overall performers in the state, and will look to have a big senior season for his high school program - looking to lead Tri-City to a state championship this season, after falling in the state finals last year.

Congratulations to Nigel and his family on this amazing accomplishment for himself from our staff here at Arizona Preps.

Arizona Hoop Review Scouting Report:  Shadd is a long and lengthy power forward prospect with loads of potential for the future.  A very athletic four-man with good lift off the floor, Shadd is an aggressive finisher aroudn the basket.  An excellent finisher at the rim.  Still very young for his grade, this young man has a chance to become a nice post talent with serious hard work.  He is an effective fnisher around the basket and plays well above the rim already.  He is able to finish strong over defenders as a result.  He has a nice jump hook with either hand and has solid footwork.  He still needs work on his low post moves to be more effective against top-notch post players.  He also can develop his footwork.  A solid shooter from mid-range, Shadd will need to develop in his ability to shoot from longer ranges, but he is at his best around the paint.  A very good and active rebounder.  A very good shotblocker with good timing.  An intriguing prospect for the future.