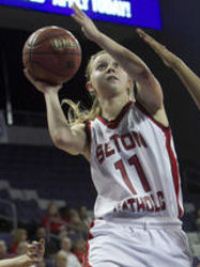 Two of the state's best girls teams in the Division-II Class, two-time state champion and #3 seed Seton Catholic (29-3) and #1 seed Peoria HS (31-5), would match up in the state finals on Saturday - Championship Saturday at Jobing.com Arena.

With the Peoria boys team also in the finals later on Saturday, the Peoria girls would look to get it done first.

After a very competitive first half, Seton Catholic would take a 22-18 lead in the game's third period, before Peoria would get hot behind back-to-back field goals from 5-foot-4 senior guard Felicia Foster and an inside basket from 5-foot-10 sophomore forward Taylor Blue.

After another basket inside from talented 6-foot senior post CeCe Pearl (Eastern Washington signee), a four-year starter for Peoria, Peoria would take a 26-25 lead with 4:55 left to play in the third period.

After a quick timeout by Seton Catholic, the referee would allow the game to continue play without the Peoria team back on the floor. Seton Catholic would convert an easy layup and take back the lead, 27-26 - making Peoria head coach Leslie Saulsby irate about the questionable play. Saulsby would plead his case to AIA officials, but to no avail.

The play would give Seton Catholic back the momentum, as they would take a 33-28 lead with 1:53 left to play in the third, after a strong left-handed inside move from 5-foot-10 sophomore Julia Barcello.

After a transition basket in the lane from 5-foot-8 junior guard Anne Marie Holter, Seton would push their lead to 35-28 with :38 seconds left in the third.

After a basket at the buzzer by Peoria's 5-foot-7 senior Jaida Bourne, on an assist from Felicia Foster, Seton would take a 35-31 lead into the fourth period.

Seton would increase their lead to 39-33 after two free throws from Barcello. After another basket inside by 5-foot-10 sophomore Heather Heild, Seton would get a steal and covert another basket after being fouled by 5-foot-3 junior Jessica Bailey. After the missed free throw from Bailey, Seton would take their biggest lead of the game - 44-33, with 4:54 left to play in the game.

But Peoria would not give up, as they would fight to get back in it. CeCe Pearl would score her 18th point of the game to keep her team close, but two free throws from Barcello would put Seton back ahead by 8 with just over 2 minutes remainning.

A steal by Pearl and her 20th point of the game after traveling the length of the floor would make the score 45-39, but talented and sharp-shooting junior guard Anne Marie Holter would seal the victory with 5 out of 6 free throws with less than a minute to play.

Final score, 52-44, as Seton Catholic would win their third consecutive state title behind the strong leadership of head coach Karen Self.

Seton's Heather Heild would finish with a team-high 14 points and 10 rebounds in her team's big win.

Peoria's CeCe Pearl would finish with a game-high 26 points in the loss, her final game of her nice high school career.

Seton Catholic will return all five starters again next season.