Sederia Carter Pouring It In For Parker 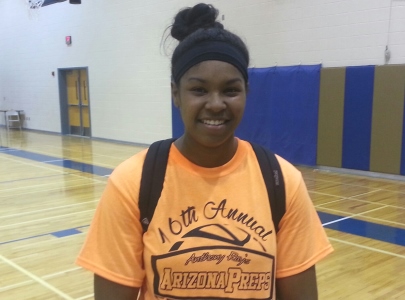 Parker High School has produced some good basketball talent over the years in boys basketball, and now they have one of the top girl's prospects in the state.  Still an unsigned member of Arizona's 2015 class, Parker High School's 5-foot-10 senior forward Sederia Carter is having a terrific senior season thus far - pouring in tremendous numbers for her team and making a strong case to be recruited at the division-I level this spring.

Carter has led her Parker HS team to a 6-4 overall record this season, while averaging a team-high 18 points, 12 rebounds and 5.5 steals per/game -averaging almost a triple-double this season.  Carter has had only one game in single digits scoring this season, and in a recent 49-29 victory over Lake Havasu High School, Carter poured in 30 points and 12 rebounds - outscoring the Lake Havasu team by herself in the game.

I recently discovered Carter in this year's Arizona Preps Fall Showcase, where Carter was terririfc in this year’s event, and was the runner-up for this year’s Tournament Most Valuable Player award.  Carter came up big in this year’s event, scoring the basketball effectively inside the paint, and also proving a nice jump shot from the perimeter.  She has very good size on her frame and is able to play inside and out as a result of her nice skill level.  Carter also runs the floor very well, and should be able to make the transition nicely into a small forward during her college career.

Carter was the Surprise Performer of this year’s event as well, and she is now regarded among the top girls prospects by our Arizona Preps Staff, and will see a significant jump in our next player rankings.

This is definitely one of the elite sleeper prospects in the state this season, and I encourage any college coach to make the trip to see her play very soon - a definite prospect that should be able to make the transition to college, since she comes from a strong basketball family as well.