Section 7 Takes Arizona To Another Level 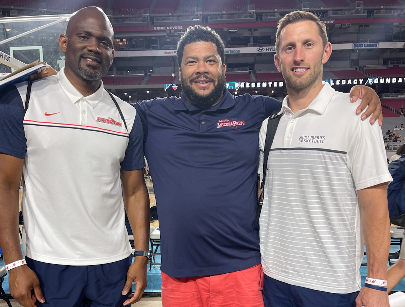 The wait is finally over, coming to an end last weekend as the Section 7 Event kicked off and took the state of Arizona, and Arizona basketball as a whole, to completely another level. While waiting for the moment for college coaches to hit the road again during an NCAA Evaluation period, basketball enthusiasts, players, high school and club coaches, and even college coaches got much more than they bargained for with the Section 7.

The Arizona basketball community wanted a chance to see top prospects physically evaluated once more by college coaches, after a long pandemic season that damaged the recruiting process for many basketball prospects. After a very long wait, which resulted in almost (2) years since a Division-I college coach had been on the road in evaluation mode, the Arizona basketball community got much more than they imagined - Section 7 Event. The Section 7 brought loads of Division-I college coaches, and also numerous coaches from other levels as well, to the state of Arizona, in a fashion not seen since the 1980's when the BCI (Basketball Congress International) was held in Arizona. Coaches from all levels of college basketball were in attendance for the Arizona extravaganza - head coaches and assistants. It was the first weekend approved by the NCAA for college coaches to be on the road in evaluation mode in almost (2) years, and every coach imaginable was in the state of Arizona last weekend.

Not only did the Section 7 event bring loads of college coaches to the state, but the NCAA, Arizona Basketball Coaches Association and Position Sports collaborated to create a venue and atmosphere at the State Farm Stadium in Glendale, Arizona, that is unmatched, never been done before and was absolutely impressive and fantastic. The amount of money invested, staff and professionalism and organization created for the event was substantial, and proved the value of such an event to each organization involved in creating it. The level of detail and organization that went into creating the Section 7 event was historic and a major highlight in my personal basketball career covering it.

Of course, with such an environment created for the teams, players, coaches, scouts and media, basketball still had to be played, and, as a result of such an environment, a lot of student-athletes helped themselves last weekend, as loads of prospects received scholarship offers. Many prospects made a name for themselves with different college programs, and also many others made a name for themselves with scouts and media. Many unknown prospects also are now on the radar of college programs as well. All as a result of the stage set by the Section 7 Event. This event helped booster the futures of many young men and women last weekend.

The Section 7 Event also takes Arizona as a whole to another level, as this event brings a lot of revenue to the state due to rental cars sales and hotels, as well as dining in the Glendale area. Many coaches, scouts, media, teams and players that attended last weekend's event, spent their money in the Glendale area that surrounds Westgate - a growing and beautiful area that has needed the capital to boost their own economy since the pandemic. This event was very beneficial to Arizona basketball, but it was just as valuable to the Arizona economy as well, and the many small businesses that benefited from such an endeavor.

It was almost two years that we waited for such an NCAA Evaluation Period to take effect, but all those that waited got much more than we bargained for with this year's Section 7 Event, as it brought us much more in the way of college coaches and opportunities for Arizona high school programs - proving that there is much more talent in the state of Arizona, than just in the prep schools. The crazy thing about all of this though, is that last weekend was just the First Session. Session II will kick off this Friday at Brophy Prep. Stay tuned.