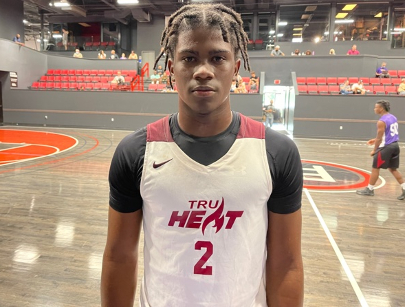 The Boy's Fall Showcase event was an exciting event - filled with numerous high school varsity girl's programs for the event. There were many top individual and team performances throughout the event. As a result of all of the top performances that were given throughout the event, there were two top performers that stood out from the competition, as two unheralded prospects emerged and took home the CO-Fall Showcase Tournament MVP honors. McClintock High School's ultra-athletic and dominating force, 6-foot-4 junior forward EJ Scroggins and Hamilton High School's talented and versatile 6-foot-4 senior guard Quincy Adams stood out from the rest of the competition, as a result of their performances over the weekend.

EJ Scroggins is a super athletic physical talent unlike many other prospects I have seen over the past several years. His superior physical size and strength and ability to dunk the basketball with extreme authority around and over defenders is intriguing an exceptional to watch. He looks similar to a smaller version of NBA superstar Zion Williamson, as he is super explosive and plays well above the rim and through contact. Reminds me also of a young Michael Craig, who previously played for South Mountain JC and has went on to have a nice professional career for himself. Scroggins is a very compact, well put together physical presence that is an undersized power forward in the Arizona high school ranks, and especially since he is so dominant against prospects his age. He is also able to play on the wing and make shots and also create scoring opportunities for himself off the dribble. He is a bull with the basketball and overpowers opposing defenders around the paint with his physicality.

Scroggins comes from a big name in Arizona, as the Scroggins family has produced loads of Division-I athletic talent in numerous sports over the years. Look for this weekend's performance in this weekend's Arizona Preps Fall Showcase to catapult Scroggins to a new level, as he still an almost unknown prospect outside of the state, but is very well deserving of serious future college recruitment. Among the best overall athletic talents in the state, regardless of high school or the prep ranks.

Another nice prospect that emerged from this weekend's Arizona Preps Fall Showcase was Hamilton High School's 6-foot-4 senior transfer guard Quincy Adams. Adams blossomed in this weekend's event, as he emerged nicely in the event - displaying a pure, left-handed shooting stroke with range and exceptional athleticism as well, that allows him to finish above the rim in traffic or in the open floor, where he excelled in the event. Adams recently moved to the state of Arizona after leaving the state of Texas, and he is a very welcomed addition for very accomplished Head Coach Doug Harris, who will have his deepest and most athletic team in many years. Harris will look to surprise a lot of people this season, as Adams will look to lead a very talented and deep group of performers this high school season.

Adams is a nice sleeper prospect in Arizona's 2022 Class, and should have a big senior season for himself and land some nice opportunities for the spring. He is very worthy of some serious college recruitment from the Division-I level, as he is very athletic, has very good size and length and competes hard and with confidence. He is also a good looking young man and has the physical tools to make a lot of noise this high school season.

I will look forward to watching both of these two young men this high school season, as they both lead to lead their respective high school basketball programs to the top of the state's competition.