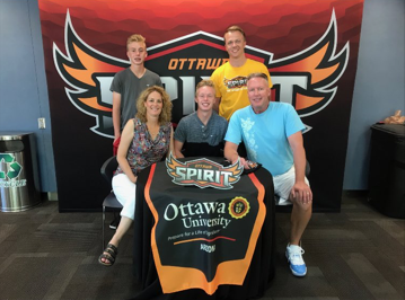 The wait is finally over for Greenway High School's sharp-shooting 6-foot-3, 170-pound senior guard Scotty Shaver as he has made his college decision.  Shaver will be taking his game to Ottawa University next college season.

After reviewing his many options for the future, Shaver decided to stay home - rather than venture to the East or Mid-West for
college.  As a result, Shaver would decide to stay home with his family in Phoenix - signing a national letter of intent with Ottawa University and new head coach Matt Heeley.

Matt Heeley took over the Ottawa program just months ago, coming from Kansas.  After winning many games in his career in Kansas, Heely took the Ottawa job  in an attempt to become a head coach for a new program, which he will now take over - building a new program in the West Valley.  In the process, Heeley has landed numerous college prospects such as Shaver.

Shaver chose Ottawa over other offers for himself from Monmouth University, North Central University and Sagu University.  He also received strong interest from Arizona Christian University.

Shaver had a challenging senior season at Greenway as the team failed to qualify for the state playoffs, and also lost their assistant coach and former Iowa State star college guard Gary Thompkins just before the high school season to an untimely death.

The recruiting process was a long one for Shaver and also very stressful for him.  He advised me that he is happy it is now over for him.

"I am just happy to have made a decision, and now I can focus on my future," said Shaver.

For Shaver, the recruiting process began at the end of last high school season, and expanded throughout the entire year, before he would finally find his college home.  For Shaver it was a long, drawn out process of landing a school - which had many ups and downs.

"It was a very stressful process - having so many people telling me where to go.  I had to make my own decision," said Shaver.

Congratulations to Scotty and the Shaver family on this accomplishment from our staff here at Arizona Preps!