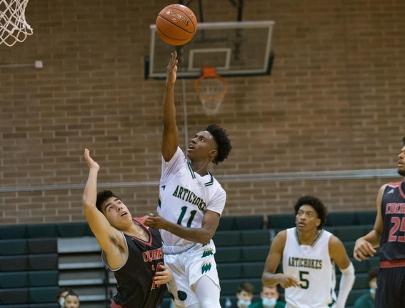 Another one of the elite performers from the ACCAC last season will also be back as a sophomore this season to build on the tremendous success that he also had as a freshman. Scottsdale Junior College 5-foot-10, 165-pound rising sophomore guard Unisa "UU" Turay  led his Scottsdale program to a very successful season in 2022, as he helped lead the program to an ACCAC Division-II Region Championship. Turay, like his backcourt mate Kelly, was also terrific on the season and ranked among the statistical leaders in the conference in numerous categories. Kelly is also now back as a sophomore to pick up where he left off, as well - joining Kelly as one of the best backcourts in the national juco ranks.

Last season, as the season began, it seemed that Head Coach Mark Bunker would have his work cut out for him, as he put a team on the floor, after a COVID-stricken season, that lacked any true size. Coach Bunker would make the necessary adjustments needed to allow his lineup to flourish, and it would pay off extreme dividends for the program, as Scottsdale would win the ACCAC D-II Conference Title - finishing with a 19-13 overall record and a 11-9 record in the conference.

Lacking any true size, Bunker would relinquish the reigns to his terrific backcourt duo of then 5-foot-10 freshman guards Carson Kelly and Unisa Turay. The gifted duo would become one of the best and hottest backcourts in the national junior college ranks, as the two guard prospects would combine to average 36.1 points per/game, and ranked as the 3rd and 4th best scoring leaders in the Conference. Both guards also ranked among the top leaders in the conference in three-point shooting - shooting better than 40% from three-point distance. The two guard prospects would become a force in the ACCAC - leading Scottsdale Junior College to the Division-II National Tournament.

Among the two guard prospects, Unisa Turay is simply different as a guard prospect. While smaller in stature, like his teammate Kelly, Turay simply plays and competes at a high level. While he is definitely a point guard prospect at the four-year college level, due to his size, he can play both guard positions as needed. He is simply a player and plays all over the floor, and does whatever his team needs to help them win games. Last season, as a freshman, he played multiple positions on the floor - scoring the basketball, facilitating and defending at a high level.

Turay is a herky-jerky point guard prospect with a nice feel for the game and a true knack for scoring the basketball. He is a high-energy performer that plays with excellent energy on both ends of the court and plays fast and at a high pace, making him very difficult to defend for opposing defenses. He pushes the basketball up the floor and is a deadly shooter with range - able to make shots from almost anywhere on the floor, and also go around or by defenders and get into the lane and finish strong with floaters in the lane or at the rim. He is a strong ball handler and passer that creates off the dribble and makes plays. He is an active rebounder for his smaller size and competes hard for rebounds. He is also a slick defender that plays passing lanes, and creates turnovers with his tenacity, quick hands and feet.

Like Kelly, Turay is currently receiving very similar recruiting interest as his college teammate, and has still yet to receive an offer, but he is definitely worthy. As a high school senior at Eduprize Prep, Turay led his high school program to a CAA State Championship, and was among the elite overall high school performers in the state. He previously received scholarship offers from several Division-I programs, while in high school, but landed at Scottsdale JC and has been electric since joining the program.

"UU is an ultra-quick and shifty PG that can score in bunches," said Mark Bunker. "He has great playmaking ability and makes very good reads in transition and the open floor. His size hasn't been an issue, as he is able to finish well over bigger guards and use his pace to create separation. He is a tough-nosed guard that likes to pick up 94 feet and does a great job of creating turnovers."

Like Kelly, Turay also performed at a high level in the recent NJCAA Rising Stars event, and raised many eyebrows with his play. I would expect many programs to continue to follow him closely, as he will return this season to combine with Kelly to make up one of the best juco backcourt tandems in America.