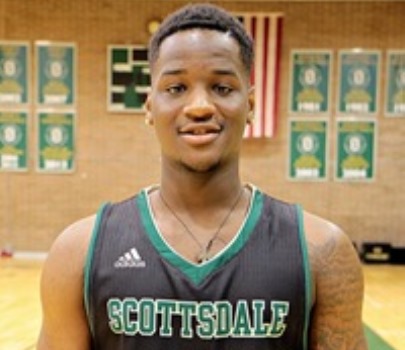 Scottsdale Community College had their best season to date last season under hard-working and tireless Head Coach Mark Bunker. Bunker led the program to a runner-up D-II finish in the conference and a 20-12 overall record on the season. A big reason for the team's success last season was the play of terrific 6-foot-2, 190-pound sophomore point guard Donald Carter. Carter had a very strong freshman campaign, and will be back this season to build on his accomplishments.

Carter returns this season in the ACCAC as the clear overall leader for his Scottsdale team, but also as one of the conference's top overall returning prospects. Last season, Carter averaged solid numbers on the season - contributing 13.4 points, 5.6 rebounds and 5.4 points per/game. He shot 48% from the field on the season, but struggled from the three-point line somewhat at 75.2%, and also in his ability to make three-point shots, converting only 24%.

Carter will look develop his perimeter shooting stroke this junior college season, and build on his numbers from last season as a sophomore that will be relied on heavily this season by Coach Bunker and his staff. Carter will lead a very talented lineup for Scottsdale this season, as they look to return for another opportunity at a Division-II Conference title.

Carter has been one of the more highly sought after recruiting targets by college coaches this summer, as he prepares for his sophomore season. I have been advised that he received a large number of phone calls from college coaches at all levels this off-season, and while he does not seem to have a clear leader in his college recruitment, he could make his college decision this fall. If Carter was to wait until the spring, he is one prospect that would definitely draw even much higher college recruitment, as he is a pure point guard prospect with a very good feel for the game, and an ability to create off the dribble.

I will be be following the recruitment of Carter very closely this fall, and will bring you updates as they begin to develop.

Arizona Hoop Review Scouting Report: Carter is a dynamic point guard prospect with an excellent handle of the basketball and a nice overall feel for the game. The ball is on a string and he likes to create off the dribble, where he is able to make plays for himself and others, while also being able to finish strong at the rim in a variety of ways. Capable of scoring quite well over bigger defenders. Pushes the basketball up the floorto the open man, and looks to fast break on every chance for easy open court opportunities. A solid mid-range shooter, but still struggles from longer ranges on the floor, although his mechanics are there. Better perimeter shooting will ultimately open up his overall offensive attack and allow him to maximize his potential as a player. A very good defender with good lateral quickness and quick hands and feet. A good rebounder for his size. A good overall guard prospect that could see mid-major D-I level recruitment with a strong sophomore campaign.