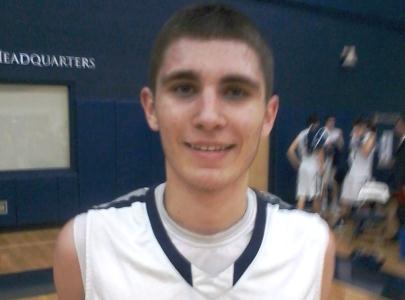 Scottsdale Prep would be without talented 6-foot-2 sophomore Nick Smith for the game.

The game would start out competitive, as both team would go back-and-forth - resulting in a 14-10 Spartan lead after one quarter.

However, the second quarter would bring a Salt River run, which gave them a small lead throughout the quarter.

Scottsdale Prep called a timeout at the three minute mark, down 24-20.  The timeout gave the Spartans some energy, as they went on 7-0 run in a minute and a half - forcing Salt River into calling a timeout.

The first half ended with a 29-26 Scottsdale Prep lead.  For the Spartans, Ben Arqueros had 7 points and a couple of assists, while Ben McKeighan added 8 points and (2) three-pointers.  Yuval Bennet-Yakoby also provided 6 points off the bench.

For the Eagles, Daniel Lopez was getting to the basket at will, and scored 12 in the half.  Robert Norris provided 8 in the first half.

The second half was set to be a good one.  Scottsdale Prep came out firing in the third quarter and forced a Salt River timeout at the 3-minute mark.  A 6-0 run, following the timeout, forced yet another Eagle timeout two minutes later with Scottsdale Prep up 45-30.

A great quarter ended with Scottsdale Prep outscoring Salt River 18-6 and holding onto a big 47-32 lead.  Ben McKeighan torched the Eagles from deep in the quarter to help blow the game open.

The fourth quarter brought similar results, as Scottsdale Prep was able to hold on and win the game 65-49.

For Salt River, Daniel Lopez had a team-high 16 points, as well as 5 rebounds.  Robert Norris scored 13 for the Eagles.

Scottsdale Prep was led by Ben McKeighan’s 19 points and (5) three-pointers in place of Nick Smith.  After scoring no points in the first half, Ethan Wright finished with 9 and collected 8 boards.  An all-around great performance by Ben Arqueros helped the Spartans, as he finished with 14 points, 9 rebounds, 6 assists and did a great job controlling the floor.

Salt River was just overmatched and were lacking in size.  Scottsdale Prep was able to take advantage of this and come up with the victory.