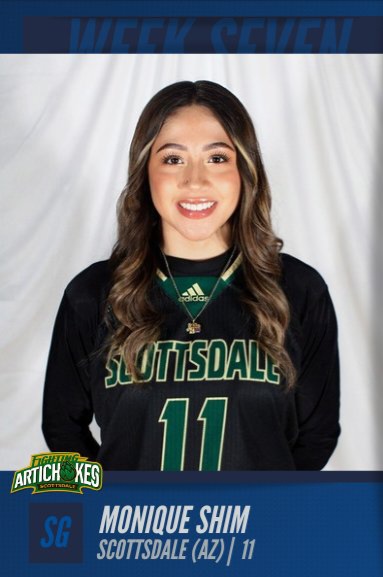 The Scottsdale Community College Fighting Artichokes are riding a 4-game winning streak riding into Saturday’s contest against Yavapai College. Coach Tasha Washington and her staff are doing a phenomenal job establishing a culture and foundation. One of the players who has been on fire is 5-foot-5 Sophomore Guard Monique Shim.

Shim was recently named the NJCAA National Player of the Week, which is an amazing accomplishment, since it includes hundreds of Junior Colleges across the country. In three games, Shim has a combined 79 points, 10 rebounds and 6 assists. That’s an average of just over 26 points/game, which is very impressive.

Shim is a three-level scorer who can strike when the iron is hot. She is a pretty good defender and utilizes her quickness to her advantage on both ends of the floor. Shim has a tight handle and just has a great feel and IQ for the game. She has been getting interest from small 4-year schools. I urge 4-year schools needing an impactful scoring guard to take a look at her. She adds value as she is a reliable scorer from all three levels. Shim also gets after it on the defensive end and competes hard on both ends of the floor. I believe she will be a fantastic D-2 prospect and will compete for a rotational spot immediately as she is an impact player.