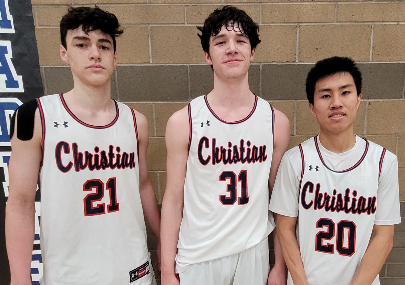 In a match-up of two teams with a combined (33) wins and only (3) total losses, Scottsdale Christian took on San Tan Charter in a nail biter.

San Tan Charter is a team with a rich history in competing in the CAA, with hopes to become the first team to win a CAA Championship, and then win an AIA State Championship the next year. Scottsdale Christian came into the game looking to keep their almost perfect season going.

Scottsdale Christian is led by their "Big Three" (pictured) of 2022 SG Garrison Sherman, 2022 F Braden Wales and 2021 PG Matthew Fan. Sherman is a player who can score from all three levels. He has great length and athleticism, which allows him to score at the rim and protect the rim defensively. Braden Wales is a 6-foot-9 power forward with extreme length and quickness off the ground. He displays terrific shot-blocking timing. While Matthew Fan is a tremendous point guard, he creates offense for his teammates, is a knock-down shooter, and is crafty when attacking the rim. The mix of their games fit perfectly.

San Tan Charter features a host of players who helped them achieve their 16-2 record. They’re led by their senior point guard Demetrus Johnson, who creates plays for his teammates out of thin air. He is capable of scoring in bunches from long range, or off the dribble and attacking the rim. They have a bully of a combo-guard in Tejai Price, who is an elite defender. He lives in the passing lanes and creates havoc around the rim. They have a center in Andrew Yeahquo who has great length and feel in the post. They also have an explosive forward in Willie Fragher who rebounds at a high level and can finish over defenders.

In the first quarter, you could tell just how evenly matched these teams were, as both teams struggled to create separation from each other. As the game began to get underway, Matthew Fan began to score off a few beautiful pin-down plays, while Braden Wales dominated defensively - making every shot tough for San Tan Charter, with his shot-blocking ability.

San Tan did a great job gang rebounding. It truly showed the toughness of their team, as they limited Scottsdale Christian to just one shot per possession. While struggling to score over SCA’s length, San Tan did a good job of attacking the rim and forcing SCA to foul. They were able to keep the game close trailing 14-12 after one quarter.

The second quarter is where both teams let go of nerves and intensity picked up. This was to the advantage of San Tan Charter, as it allowed their athleticism to shine. Freshman Jaleel Moore checked into the game and changed the pace. He is an energy bringer and helped contain Matthew Fan. He was able to spark-plug a run and change the energy of the game. Even with the change of pace, Fan and Sherman were able to score and create for their teammates, which helped them lead 23-20, going into the half.

The second half started with a bang literally, as Demetrius Johnson came out very aggressively creating for his teammate Willie Fragher, who did an amazing drop-step dunk over the defenders. San Tan also received a boost of energy from Cole Foote, who was able to knock down a key shot to keep the game close. The third was much more of a defensive effort, with both teams creating tough shots for the other.

The fourth quarter began as the third quarter ended, as a defensive affair. Branden Wales had a huge block to discourage the driving of San Tan Charter, but that did not stop Kyree Richardson of San Tan from making a few clutch plays to get them their first lead of the game. San Tan’s defense held Scottsdale Christian. From here, a back and forth of clutch buckets from Garrison Sherman of SCA and Demetrius Johnson of San Tan, led to a tie game with just under a minute left.

As time ticked down, SCA’s coach, John Anderson, drew up a perfect pick-and-roll play, which resulted in a late score. This would be the defining bucket to advance SCA to the Class 3A Finals.