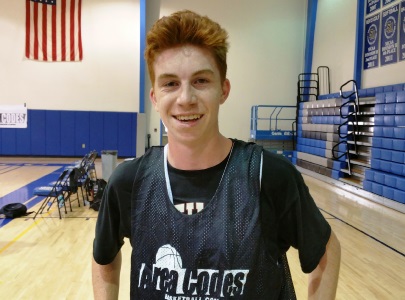 The Scholar Athlete Academic Showcase took place on Saturday at South Mountain Community College.  Organized and directed by Chad Groth, this year's event was very quality as it provided a lot to it's participants.  Each participant received a highlight video from the event, and also received a nice talk from top-rated West Coast scout Dinos Trigonis.

There were more than 60+ players in attendance for the event.  Each of the prospects were high academic student-athletes, a nice attribute to have in the recruiting process.  Here are my top individual performers that I saw perform on the day . . .

- Johnson (pictured) is coming off a good spring and summer performance for himself and he has developed physically since the high school season.  As a result, Johnson has become a much more versatile performer - able to make plays much more off the dribble now for himself.  Johnson had the most impressive day of any player in the event, as he knocked down shots from almost everywhere on the floor.  Johnson shot the basketball very well off the catch or while moving, which was impressive.  Whether he can defend players at his position or not will determine his level of college recruitment.  His skill level makes him an easy target for smaller college programs.

Rhymes is a very nice looking prospect with nice length and size.  He has a nice range of offensive skillsets and has the potential to grow into a very serious player over time.  He is not able to fully put it all together as of yet, but when he does, some college program will be very happy.  Rhymes is very atheltic and thrives in the open floor, where he is able to handle the basketball and make plays off the dribble - for himself or others.  Would do great with a year of post-grad, which would help him develop physically.  Among the top sleeper prospects in the state.

Baker filled it up offensively on the day and was among the top individual performers.  Scored from almost anywhere on the floor and has a nice left-handed shooting stroke, which he uses to make shots with regularity.  A good ball handler that uses his dribble to create space for himself and make plays around defenders.  Plays with a high level of self-confidence and has a nice overall motor.  A very good defender with nice length and quick hands.  A good sleeper for a smaller college program.

Arms was a bright spot on the day.  A lengthy, high-energy scoring guard prospect that plays uptempo and likes to score in transition.  Arms is a good shooter of the basketball with range, and also can score off the dribble - possessing a good overall mid-range game.  A very good defender with quick hands as well.  A good sleeper prospect for a smaller college program.

- Jones has really come on as of late, and I am impressed with his size and willingness to use his body to gain a physical advantage over his opponents inside the paint.  While he is not a finished product by any means yet, he has some upside and should really develop over time at the next level.  Worthy of some serious attention from smaller college programs.

Combs is a nice talent with an excellent frame for the future, as he possesses very broad shoulders and has good physical strength.  He has a nice array of offensive skills and is able to play inside and out.  He simply needs more time to develop to reach his full potential, but he definitely looks the part already.  Over time and with continued hard work, this young man could become one of the better sleeper prospects in the class.

Thompson is a big-time athletic talent that should look to have a terrific career in football.  Has the body and the physical gifts of a prototypical defensive back or wide receiver.  Thompson can really play basketball though and he excels in the open floor, where he is able to play above the rim and finish strong dunks.  A highlight reel dunker.  Also can score the basketball from the perimeter with nice range on his shot or off the drible, although he needs to improve his ability to make plays off the dribble to open up his overall game.  A nice overall athlete.

Potthoff is a versatile post player that likes to set up his defender with a variety of low post moves and perimeter jump shots.  He has a wide array of offensive skillsets, although he is not often counted on to score much.  It suggests that he should really develop over time and would be an excellent player for a smaller college program looking for an active post player that can defend small forwards.  While he is not very big, he plays much bigger than his size suggests.  A sleeper prospect.

Troutt may not look like a lot, but he has a nice package of skillsets that allow him to be very effective on the basketball court.  A nice ball handler and passer, Troutt is a floor general and likes to run a team.  He is a good athlete and finisher in transition, but always seems to be looking for the open player on the floor.  A good shooter with range, that is also able to make plays off the dribble as well.  Solid defender.

Fultz is simply a big-time shooter with a quick release on his shot that has excellent range.  He only needs a little room to get one off, and, when he does, he is very consistent.  A solid ball handler and passer.  Competes hard on both ends of the floor.  Fundamentally sound.  Solid defender.

Faul is one of the better 2017 prospects in the state and definitely at his position, as a strong low post player that rebounds the basketball and finishes strong in the paint.  Faul has a strong physical frame and good lower body strength.  While he is not much of a scorer, he is a good passer out of the post and moves without the basketball.  A great glue-guy for his team, Faul has very good value.

Grier was my top surprise performer of the day - showing off excellent athelticism and a nice overall offensive skillset.  He made shots from the wing or off the dribble from mid-range.  He also showed some explosiveness while attacking the basket - proving that he is capable of throwing down dunks off drives.  A good looking smaller school prospect for the future.

Rhymes is a sure-fire point guard talent for the future.  A very skilled and confident young guard prospect, Rhymes is another member of the famous Rhymes basketball family.  This version is a ball-handling wizard with an excellent feel for the game and strong court vision.  He has all the fundamental tools to become a special player over time, he will just need to improve his body by slimming down over time and becoming more athletic.  He has very good quickness though already for his size, so keep an eye out for this young prospect.

The younger brother of former Arizona star guard Jaron Hopkins, who currently attends Fresno State after a recent transfer from the University of Colorado.  Hopkins is a long and undeveloped guard prospect that looks a lot like his brother at the same age.  Hopkins is an excellent ball handler that sees the floor and seems to really enjoy the game.  A good scorer with a variety of shots in his bag.  As he matures physically, he will see his game take off.  Keep a close eye on this young man over time.