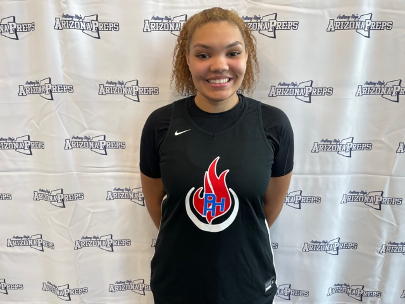 The PHH Prep girl's basketball program is absolutely loaded with superb talent, as they won the Grind Session Championship last season. One of the top overall performers for their girl's basketball program is 6-foot-1 senior forward Saniyah Neverson. While an underrated prospect, Neverson is one of the elite performers in Arizona's 2022 senior class of prospects. While she did not receive many bigger offers, she was well deserving of much higher college recruitment. Neverson recently decided to end her college recruitment - giving a verbal pledge to Northern Arizona University and their women's basketball staff.

Northern Arizona Head Coach Loree Payne is working hard to build a winning program in the Big Sky Conference, and the addition of Neverson should pay excellent dividends for their basketball program immediately, as she is a well-built and college-ready prospect that competes hard on both ends of the floor, and is a winner. Neverson is a true stretch-4 post prospect with a strong physical frame and good athleticism. She runs the floor hard, rebounds exceptionally well on both ends of the floor and has a soft touch from the perimeter, combined with good low-post footwork around the basket. She has a longer wingspan on her compact frame, and is able to defend on the low block or away from the basket when she faces quicker opponents from the post position.

Last high school season, Neverson helped to anchor a formidable and leaded lineup at PHH Prep, where she helped the program to win a lot of games on the season and a Grind Session Championship. She was a serious contributor on a deep and loaded ballclub that produced many Division-I girl's prospects. She will return for her final senior season to attempt to help lead the program to another Grind Session Championship.

Neverson transferred to PHH Prep after a very strong sophomore season at Valley Vista High School, where she averaged impressive numbers on a State Championship team. Neverson averaged 13.5 points, 7.5 rebounds, 5 steals and 2.5 blocks per/game on a very talented Valley Vista team that finished with a terrific 28-3 overall record on the season - winning the 6A State Championship.

Arizona Preps recently caught up with Neverson about her pledge to NAU, while she competed at a high level in the Arizona Preps Fall Showcase. Neverson advised Arizona Preps that she fell in love with the NAU Basketball program.

"I took my visit and I fell in love with the campus. I get along with the coaches so well," said Neverson. "I am super excited, and it's close to home, so my Mom can come up every home game if she wants.

She went on to say, "I just think the family environment at NAU is so good. That meant a lot to me."

Congratulations from our Arizona Preps' staff to Saniyah on this amazing accomplishment, and also congrats to the PHH Prep basketball program on another Division-I commitment from their amazing girl's basketball program.