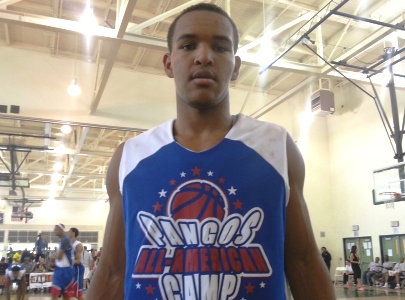 This weekend, the exciting annual Pangos All-American Camp took place, once again, at Cabrillo High School in Los Angeles, CA.  Directed and organized by West Coast basketball scout and Belmont Shore club program head coach Dinos Trigonis, this annual camp brings together many of the top prospects in the country for a weekend battle in front of numerous college scouts and media.  Annually, this event has omitted many of Arizona's top prospects, and this year was no different as merely two different Arizona prospects received invites to the event.

Consistently, Arizona's top-rated prospects have performed well in the camp, and this year was no different as the two Arizona prospects invited played very well, while one Arizona prospect, Sunnyslope High School's talented and surging 6-foot-3 rising senior guard Sammy Thompkins emerged as a high-major quality guard this past weekend, and one of the elite guard prospects in the West.  Thompkins would explode in this year's event - ranking as the camp's second leading overall scorer in the camp.  While averaging 19+ points per/game in the camp, Thompkins would get selected among the Top 60 campers in the event and earning an all-star invitiation as a result of his efforts.

Thompkins proved in this weekend's event that he is among the elite guard prospects in the West and as good a prospect as there is in Arizona's 2015 class of prospects.  Thompkins has had a very strong spring performance for himself thus far, and will look to even raise his recruiting stock a great deal more after a strong summer, which will include an invite to this summer's prestigious Reebok Breakout Camp in Philly (July 8-11).

Thompkins will now look to garner much more recruiting interest this summer, after having such a big showing this past weekend at Pangos, and already proving himself this spring on the club circuit.

Recruiting Notes:  Also invited to this year's Pangos All-American Camp was St. Mary's High School's 5-foot-11 rising sophomore guard Marcus Shavers.  Shavers was the second youngest prospect to be invited to this year's camp, and is one of the state's premier young prospects and top overall performers after a superb freshman season for himself.  Shavers is a talented guard prospect with excellent quickness and an advanced skillset with the basketball in his hands.  An explosive scorer with a very bright future, Shavers had a good overall showing at this year's camp.

Shavers would also take an unofficial recruiting visit to the campus of UCLA on Monday (after the event), while he and his family were in town.