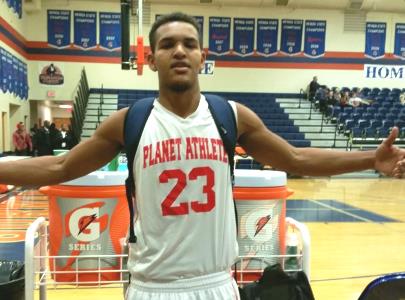 While we have not reported it since things took place two weeks ago at Sunnyslope High School, still trying to collect information on what occurred, Sunnyslope High School's gifted 6-foot-3 senior guard prospect Sammy Barnes-Thompkins has now landed at Planet Athlete Academy in Phoenix.  Barnes-Thompkins will finish out his final senior season of high school at the program after being dismissed from the basketball program at Sunnyslope.

While the details of what took place at Sunnyslope are still unknown, and while I don't care to go into detail about the matter on this website anyway, the bottom line is the state's top senior basketball prospect will not be leading the Vikings this season to the state playoffs, but rather will be finishing out his season with Planet Athlete - still looking to sign with a college program this spring.

Barnes-Thompkins was off to an excellent start on the season for Sunnyslope, and was fresh off a 40-point performance in a recent narrow, double-overtime loss to a very athletic Cesar Chavez team.  In the 81-78 double-overtime loss, Barnes-Thompkins would sit out the game’s first half, but then would score, what must be a state scoring record of 40 points, in the game’s second half.  Barnes-Thompkins would sit out the first half due to team rules (missing practice), but would come out on absolute fire in the game’s second half.  While the star guard would come up just short in his attempt to lead his team to the come-from-behind win, his effort was tremendous.

After an extremely impressive spring and summer performance for himself, Thompkins generated loads of college attention and scholarship offers.  After mulling over his current recruiting options, Thompkins decided to forgo the fall evaluation period, and move to signing during the late signing period.

Thompkins is also coming off an excellent club season, while leading his club program to numerous strong finishes.  In the process he led his club team to an upset win over the nation’s #1 team, the New Jersey Playaz (2014 Nike Peach Jam Champions).

It remains to be seen how this recent situation will affect the recruitment of Barnes-Thompkins.  Hopefully he can bounce back and finish the year strong.