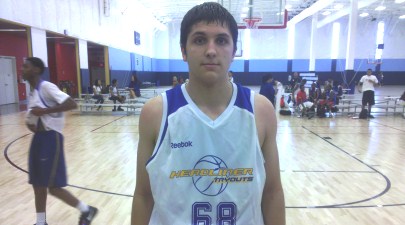 Mesquite High School's 6-foot-3 graduating senior guard guard Sami Bzai had a long wait during the recruiting period, but it is finally over for the sharp-shooting guard prospect.

After a long recruiting period for himself, Bzai signed a national letter of intent this weekend while on an official recruiting visit for himself to Nebraska-Kearney - an NCAA division-II basketball program located in Kearney, NE.  Assistant coach Kevin Lofton was instrumental in the recruitment of Bzai, and has worked hard in recruiting the state of Arizona as of late.  Lofton also recently reeled in former Arizona State transfer and Fairfax High School graduate Pierre Newton.

Bzai will now join Newton, former club teammates with the Arizona Magic, on the school's roster.

Bzai at one time was being recruited by numerous division-I programs after a strong spring and summer performance last year with his Magic program, but saw his recruitment begin to tail off as a senior, even though he had a big senior season for the Mesquite basketball program.

During the recruiting process, Bzai received serious interest from such division-I programs as VCU, Pepperdine, Northern Colorado, Northern Arizona and Houston Baptist.  But after many of the schools dropped off, Bzai chose to go the diviison-II route - a level that he should be able to have a very good basketball career at.

Bzai had a strong breakout junior season during the 2010-2011 season.  A relatively unknown prospect as a junior after seeing very little playing time as a sophomore on a team that finished 25-5, Bzai came up big in his junior season - leading his Wildcats in scoring with a 17.5 points per/game scoring average. He also averaged 3.9 rebounds, 1.4 assists and 1.5 steals per/contest, while shooting 47% from the field and 38% from three-point distance.  Not slowing down one bit, the sharp-shooting guard tore it up on the spring and summer AAU/club circuit last off-season - leading his talented Arizona Magic club program to a #21 national ranking by FiveStarBasketball.com, after winning last year's Double Pump Spring Classic and Adidas Three Stripes tournament crowns.

As a  senior, Bzai returned to be one of the top overall players in the state - regardless of class, averaging a team-high 21 points, 3.6 rebounds and 2.1 assists per/game.

Bzai proved himself as one of the elite shooters of the basketball in the country during his high school career, and he will be an excellent signing for the Nebraska-Kearney men's basketball program.

Arizona Hoop Review Scouting Report: Bzai is a true shooting guard prospect - capable of putting the basketball in the basket from anywhere on the floor and at a high rate. He shoots the basketball with precision and with unlimited range on the floor. Bzai is at his best shooting the basketball with a quick release, as he is among the very best shooters of the ball in the country. Possessing a very pure shooting stroke from anywhere on the floor, Bzai is difficult to defend on the court, since he has unlimited range. He also is capable of getting his shot off almost at any time, and can turn a bad shot into a good one as a result of his shooting prowess. This ability to shoot the basketball is his most attractive attribute and sets Bzai apart from many others in the class. Bzai also seemes to raise his level of play to his opponent - making him a very tough competitor and someone you want on your team. His desire to win is very noticeable and is glaring to the observer.  He still nees tofocus much more on the defensive end of the floor to reach his full potential as a player.  Bzai is a solid penetrator and ball handler, although these are two areas that he will also need to focus on to reach his maximum potential as a player. Bzai has tremendous work ethic as a player and is a gym rat.