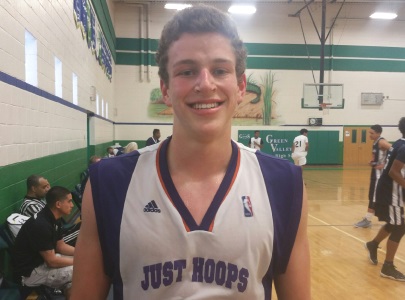 Now as we begin taking a closer look at the top prospects in Arizona's 2018 Class, as we near the end to the high school season, and in preparation for the spring evaluation period, the city of Tucson is filled with some talented prospects.  One of these gifted prospects is Catalina Foothills High School's 6-foot-3 junior guard Sam Beskind.

One of the more underrated prospects in the class, Beskind is a gifted guard prospect with a nice overall skill level and excellent toughness and very good athleticism.  These attributes as a player make Beskind a definite sleeper prospect in the class that is worthy of serious college attention.  The level of college that he will land at will definitely be determined by his play this up-and-coming spring and summer, as Beskind enters the most important off-season of his young career.

Beskind has helped Catalina Foothills (20-5) this high school season to one of the best records in the state's 4A Division - primed for a big state playoff run beginning next week.  After a loss to Deer  Valley HS at home in late December, Catalina Foothills has won their last 10 games in a row, and has not lost a game yet in 2017.

Beskind is a major reason for the team's success, as he is a strong performer on both ends of the floor, and is a load for opposing teams to defend.  A very good shooter with range on his shot, Beskind is a very skilled guard prospect that extends the floor and is also very tough off the dribble to defend for opposing guards, as he has a strong physical frame and is very tough off the dribble.  He is a very good finisher in the lane and in traffic over defenders, where he likes to draw physical contact and finish plays.

Beskind is also a strong rebounder for his size and plays much bigger than his size suggests.  A very aggressive prospect that competes at a high level on both ends of the floor.  A good on the ball defender and team defender, Beskind is a two-way player.

The level of college recruitment that Beskind will attract will be determined this club season, as he travels around the West with his club program, Powerhouse Hoops.  I believe that Beskind will impress many smaller college programs, and could play himself into the division-I level with strong performances, which he is definitely capable of.

I will definitely keeping a close eye on Beskind the remainder of this high school season, as he looks to lead Catalina Foothills to a state championship, and will continue to follow him closely this spring and summer.