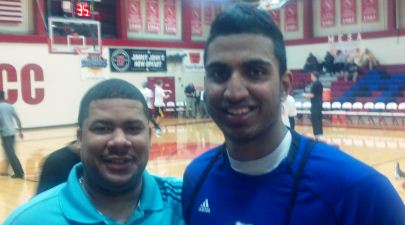 No one has been through more than former Brophy Prep High School 2011 graduate Sai Tummala.  After a very diminished college recruitment as a senior in high school, Tummala's athletic potential caught the eye of one of the nation's top basketball programs - the University of Michigan.  Tummala took his chances at playing in Ann Arbor, and decided to walk on to the storied basketball program, only to transfer schools less than a year later - heading the junior college route in an attempt to improve his college recruitment and for an opportunity at a much brighter future.

On Thursday morning, the talented and highly sought after 6-foot-7 freshman forward from Salt Lake City Junior College in Utah, chose to decide on the Arizona State Sun Devils and head coach Herb Sendek.  Tummala chose the Sun Devils over heavy interest from a large number of division-I schools.

Tummala's story is one of the best individual stories I have ever been a part of.  This young man pushed himself and made sacrifices that I have not seen often by today's student athletes, especially from Arizona.  As a high school junior, Tummala was a highly sought after recruiting target heading into the spring of 2010.  After an injury plagued him throughout the spring evaluation period and caused him to miss playing on the club circuit, Tummala elected to play for the storied Compton Magic (CA) during the summer months.  While playing alongside such NBA prospects as Jahii Carson (Arizona State) and Isaiah Austin (Baylor), Tummala saw very little playing time and very seldom got the basketball.  As a result, Tummala saw his college recruitment diminish to a point where he had very few offers for himself.

During this time period, Tummala went through a lot of frustration, as schools that had once offered him a scholarship, were now looking him over and reconsidering their previous decisions to recruit him

"It was tough, but I knew that I could play," said Sai Tummala.  "No matter what I was going to continue working."

An excellent student looking to pursue a degree in Pre-Med, Tummala chose to go to his dream college program - the University of Michigan as a walk-on.  Tummala was from the state of Michigan and a chance to play for the Wolverines was an honor to him and his family, especially since Michigan was such a great athletic program with a terrific academic foundation.

While Tummala was a preferred walk-on by the Michigan basketball staff, the lack of playing time and hard work and dedication put into competing for a spot on the team, caused Tummala to consider leaving the program for a better opportunity for himself.

Tummala's parents are both doctors and very educated people.  Sai's sister, Shilpa Tummala, a graduate of St. Mary's High School's historic girl's basketball program, attends Harvard University and plays for their women's team, after a storied basketball career in high school where she won many honors.  Sai's family stood for excellence and he was considering leaving an excellent situation for himself, but Sai wanted more for himself.

After leaving the Michigan program and obtaining his release from the school, Sai considered his recruiting options for the future.  During the summer of 2012, Sai would bypass several scholarship offers for himself and decide to go the junior college route - a major risk for himself.  Sai could get hurt, he could under perform - anything could happen but Tummala chose to take the risk for a better future.  Keep in mind, going to a junior college and leaving a major Big-10 program was also a major step down for the Tummala family, but Sai followed his heart and decided on Salt Lake City.

This season, the very much improved and much more mature Tummala took his game to new heights, as he led his talented junior college team in scoring and earned NJCAA Third-Team All-American honors, as a result of his strong play.  Tummala led Salt Lake City JC to Hutchinson, Kansas for the prestigious Junior College National Tournament.  Tummala's play would catch the attention of many high-major division-I programs, as such schools as Nebraska, PITT, Georgia, Arizona State, BYU, Nevada, Drake, Miami of Ohio and Tulane each scrambled to get involved with the talented wing prospect.

Tummala would then go through a lengthy recruiting process before two more elite high-major programs would look to get involved late - the University of Arizona and the University of Texas.  With two powerhouse programs looking to get involved with Tummala as late as this week, Tummala would have to search his heart in an attempt to make the right decision for himself.

"The recruiting process was great, but this was one of the most difficult decisions I've ever had to make," said Tummala.

Tummala would then mull over his recruiting options, and with a heavy heart he would elect to give a phone call to the Arizona State men's basketball staff on Thursday evening.  New Arizona State assistant coach Stan Johnson would be instrumental in the recruitment of Tummala.  Johnson had recruited Tummala the longest of any division-I coach at Drake University and had offered him a scholarship during the fall of 2012.  After the Drake staff and head coach Mark Phelps would be released from their duties at the Drake program early in the spring, Johnson would accept a position at ASU, and would continue to recruit Tummala for the Sun Devils.

"I'm really looking forward to being a Sun Devil, and plan on contributing in any way I can," said Tummala.

Tummala fills a major need for the Sun Devils for next season.  With the loss of former Arizona Preps' standout Carrick Felix to graduation, the Sun Devil's basketball staff do not have a player with Tummala's skillset and athleticism at the small forward position for next season.  At Arizona State, Tummala will again team up with former club teammate Jahii Carson.  Tummala had also played with Carson on the Arizona Gym Rats under head coach Jeff De Laveaga as a middle-schooler.

Tummala will now come back to the state of Arizona, after leaving the state as a high school senior and with many critics of his ability to play the game.  Now Tummala returns as a big-time college recruit with excellent potential for the future with the Sun Devils.  Tummala has overcome tremendous obstacles in his path, and worked hard on his craft to become the player and young man that he is today.

"I really want to thank Mr. Ray for helping me through this process," said Sai Tummala.  "His knowledge about how recruiting works and what different coaches are like was invaluable for me."

Give N' Go Hoops Scottsdale-based trainer Padraig Obrien was also very instrumental in the recruiting process of Sai Tummala, and aided the Tummala family during the process.