Saguaro’s Berg Filling It Up 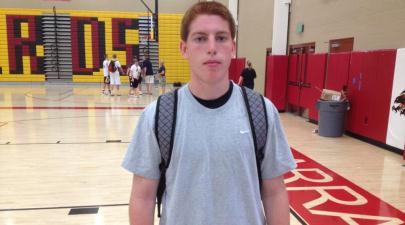 Since being a youngster in the state of Arizona, he has been widely recognized as some that can fill it up - scoring the basketball at a high rate and shooting the basketball with excellent precision.  While many have marveled at his ability to put up big scoring numbers and some have even questioned his ability, Saguaro High School's 6-foot-1, 185-pound senior combo-guard Ryan Berg has remained consistent - torching the nets throughout his four-year varsity career.

After a strong season at the varsity level as a freshman, Berg helped lead his Saguaro HS team to a state championship runner-up finish as a sophomore.

Berg blew up last season as  junior - averaging 20.8 points, 3 assists and 2.6 steals per/game.  Berg also led his Saguaro HS team to a strong 22-9 record on the season, and a narrow one-point loss to Salpointe Catholic HS in the state playoffs.

After his junior season, Berg carried over his strong play onto the spring and summer AAU/club circuit.  While playing for his club program, the Arizona Aces, Berg torched the competition he was faced with - averaging better than 30+ points per/game on the club circuit and against stiff competition.  Berg had numerous high-scoring games last spring and summer, but none better than his 30+ point outburst in a win over the Compton Magic (CA) - proving once again that this young man can score the basketball against the best.

This season, Berg has continued his terrific pace- ranking among the top overall scorers in the state once again and averaging 23 points, 3 assists and 3 steals per/game.  Berg has scored 24 or more points in a game on 13 different times this season, and amidst double-teams and defense designed to slow him down.

Berg's best effort of his career came last week in a game against Paradise Valley High School; a game in which Berg scored a game-high and career high of 43 points.  Berg actually scored 43 of his team's 62 total points in the game.  In the game, Berg shot an amazing 16 of 23 from the field, and also made 11 of 16 three-pointers.  Berg's point total was the second most points scored in a game all-time at Saguaro High School.

Berg's tremendous production has not come by accident, as Berg is a gym rat that works on his game daily.  This past summer, Berg also worked out hard on his body to prepare himself for the collegiate level - shedding some pounds and toning up his body a great deal.

Berg is now prepared to lead his high-scoring and sharp-shooting Saguaro team into this week's Division-II, Section-III tournament where he will look to add to his career scoring numbers, while helping lead his team as far as he possibly can.

With such a long list of schools showing interest in him, Berg advised me that he would like to find the right fit for himself as a player, and that he wants to land at a school where he will get an opportunity to play early.

Arizona Preps will continue to follow the recruitment of Berg closely this post-season and into the spring evaluation period - bringing you any recruiting updates as they begin to develop.

Arizona Hoop Review Scouting Report:  Berg is a strong and fundamentally sound basketball prospect with a high ability to score the basketball in a consistent manner.  He is the state's best shooting threat - capable of scoring the basketball in bunches and shooting with precision from anywhere on the floor.  He can catch and shoot from the standstill position or while on the run -a throw-back shooter of the basketball.  He is also able to get his shot off against bigger and quicker defenders, as he is very crafty with the ball in his hands and has an excellent feel for the game.  Berg is also a strong ball handler that is capable of playing either guard position on the floor.  His excellent feel for the game allows him to find the open man on the floor, and even see plays before they happen at times.  Berg makes other players he plays with better because of his scoring prowess and his ability to find the open player on the court.  Pushes the basketball up the floor.  A solid rebounder that plays bigger than his size suggests.  A solid defender that has improved a great deal in this area, and has good court anticipation and quick hands.  Among the top sleeper prospects in the West, and a player that will help the program of his choice a great deal.