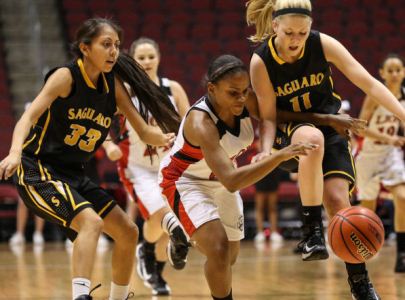 The stage was set at Glendale's Jobing.com Arena on Saturday as #8 seed Saguaro High School (26-9) looked to complete their Division-II state championship run in the state finals against a very strong group in #6 seed Flowing Wells (29-5).

Saguaro High School, with no seniors in their starting lineup, came out big with a three-pointer from the wing and then a steal and a layup from leading scorer, 5-foot-8 junior guard Casey Rarrick for a quick 5-2 lead for Saguaro.  After a basket inside by 5-foot-10 sophomore post Kiley Davis, Saguaro jump out to a 7-2 lead.

Flowing Wells would get it together though and go on a nice 7-0 run, led by the play of 6-foot-1 senior post Lyndsay Leikem (Ole Miss signee).  Leikem would convert 1 of 2 free-throws and also get two offensive put-backs for her team to help them take the lead, 9-7.

After a nice three-pointer from the wing by 5-foot-5 sophomore guard Jelani Huma off an assist pass from Casey Rarrick, Rarrick would close out the first quarter with another big three-pointer of her own - making the score 15-11 in Saguaro's favor.

In the second period, Leikem would begin to take over, as she would connect on two consecutive three-pointers, before teammate 5-foot-4 senior guard Tatyana Portela would score to push Flowing Wells ahead 19-15.

Saguaro would begin to struggle with the basketball, as they would turn the ball over numerous times, but then their leader, Rarrick, would calm things down with a big three-pointer, her third of the game - making the score 19-18 in Flowing Wells' favor with just over 3 minutes left to play in the first half.

After another basket inside by Leikem would put Flowing Wells ahead, 21-18, Saguro would get a big three-pointer from the wing by 5-foot-8 senior guard/forward Erika Kleinsteuber - tieing the game at 21 all with :44 seconds left to play in the half.

Sagauro would take a 25-23 lead with just under 6 minutes remaining in the third period, after a mid-range jumper and then two free-throws after being fouled by 5-foot-10 junior forward Naomi Reyes.

With Leikem being double-teamed for much of the second half, she would make a nice assist pass to her teammate, 5-foot-10 senior forward Czarina Walker for a three-point play after being fouled on a drive to the basket.  Walker's free-throw would give her team a 26-25 lead, until Saguaro's Huma would hit a big three-pointer from the top of the key to give her team back the lead, 28-26.

No problem for Leikem, as she would come right back to score inside - tieing the game at 28 all with 4 minutes left to play in the third.

Then, with just over a minute left to play in the third period, Saguaro's Jelani Huma would hit her third three-pointer of the game, again from the top of the key, to give her Sabercats a 32-30 lead.  But Leikem would come right back again for Flowing Wells to tie the game at 32 all.

With the score tied, Rarrick would connect on another three-pointer for herself with :44 seconds remaining in the third - putting Saguaro ahead 35-32 to end the third period.

To start the fourth period, Saguaro's Naomi Reyes would get fouled on a three-pointer - creating the fourth foul of the game for Flowing Wells' talented 6-foot junior forward Shalise Fernander.  Reyes would convert all three of her free-throws to put Saguaro ahead 38-32.  Flowing Wells head coach Michael Perkins would keep Fernander in the game.  With 6:48 left to play in the game, Reyes would hit a big three-pointer to put Saguaro ahead 41-32.  Then with 6:17 left to play, Kiley Davis would bank a sweeping hook shot over a defender to give Saguaro their biggest lead of the game, 43-32.

Leikem, who had struggled to get many scoring opportunities in the game's second half, would score in the lane with 3 minutes left to play - making the score 44-34, Saguaro.  But Flowing Wells would simply run out of time in the game, as they would be unable to make shots late.

Both teams would take their starters out of the game in the final seconds of the game, as Saguaro would cruise to an impressive 49-36 Division-II State Championship victory - the first girl's state championship in the school's history.

Saguaro finished the season as winners of 19 of their last 21 games on the season.  Rarrick led Saguaro with 15 points in the championship victory and had this to say after the game, "This feels so good."