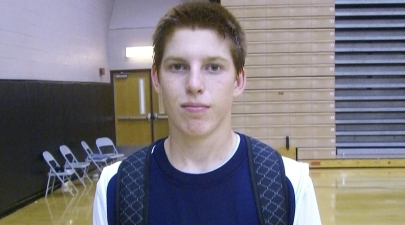 On day two of this year's McClintock Holiday Shootout, there was more exciting action taking place as each of the top teams in the field looked to advance even further in the tournament - hoping to land in the tournament's final game on Saturday evening.

The best game of the day saw a very well-coached Mountain Ridge High School (7-7) team take on a gritty Highland HS (10-3) team for the opportunity to advance to the tournament's semi-finals.  Mountain Ridge, coached by valley basketball veteran Eli Lopez, has really developed as a team and as a basketball program quickly over the past two years.  Led by the play of 6-foot-1 senior guard Daniel Nunez, who would finish with a game-high 32 points in the contest, Mountain Ridge would take Highland into overtime.

The game would look to head into a second overtime, until both teams would fight for a loose ball with just seconds remaining in the game.  As both teams would look to regain possession of the basketball, Highland would get possession and fire a long pass down the floor to a streaking teammate - 6-foot-6 junior forward Jake Toolson.  With relative and Boston Celtics NBA scout Austin Ainge looking on from the stands, Toolson would lay the basketball in as time would expire - giving Highland a narrow 78-76 victory.  Toolson would finish the game with a big triple-double performance in the win - 22 points, 13 rebounds and 12 assists.

Highland will now advance to one of the tournament's semi-final games, where they will now face a tough Scottsdale Saguaro HS team.  Saguaro (12-3) did what no one else in the state has been able to do for the last two tournaments the Padres have played in - slow down Marcos De Niza (9-3).  Saguaro would get out to a big lead in the game and hold on to win the contest 81-71.

Saguaro impressed me and surprised me with their quick play and ability to shoot the basketball from anywhere on the floor.  Saguaro blew this game wide open from the start - taking a huge 64-46 lead into halftime.

Behind the consistent and sharp shooting of 6-foot-1 senior guard Ryan Berg and 5-foot-10 senior Mike Hauser, Saguaro looked to be in cruise control throughout the game.  Berg was amazing in the game, looking refined as a player and sporting a physical frame that has cut down serious body fat.  Berg's hard work on his body and his game was glaring, as he earned a scholarship offer from Minnesota-Deluth after the game.

Marcos' high-scoring 6-foot-4 senior guard Richaud Gittens (Weber State signee) would do all he could to keep his team in the game.  With Weber State assistant coach Phil Beckner looking on, Gittens would pour in a team-high 28 points in the loss.

Chandler would have no problems with host McClintock, as they would jump out to a fast 24-13 first quarter lead.  A 30-point third quarter by Chandler would blow things wide open, and Chandler would cruise to a nice 81-68 victory.

In the other quarterfinal match-up, Brophy Prep would hold off a surging Desert Ridge HS team by four points.  Brophy would build a nice first half lead, 11 points, and would cruise to a narrow victory.

Gifted and sharp-shooting Desert Ridge HS 6-foot-1 senior guard Hunter Thomas would finish with an amazing game-high 38 points in the loss.  Thomas is a big-time sleeper guard prospect that will definitely make a big jump in our next spring player rankings for the point guard position.