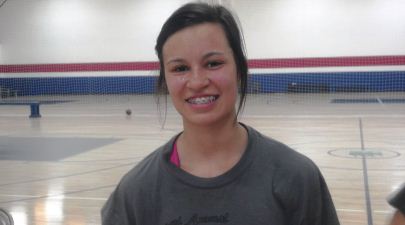 With the start to the 2012-2013 high school basketball season set to start next week, one girl's prospect that will be looking to have an even bigger season than last year and lead her team to the top of the Division-III Class is Safford High School's 5-foot-11 junior forward Jordan Abalos.

No girl's prospect in the state had a more productive season last year than the talented and skilled Abalos, and she was only a mere sophomore.  While playing for her father, Robert Abalos (a physical specimen), Abalos turned in a monster season.  As a sophomore last season, Abalos averaged staggering numbers - 21.8 points and 14.6 rebounds per/game.

Abalos' numbers were that of a top-rated senior prospect and she still has two full years of high school basketball remaining in her high school career.  She had a career high of 40 points on 20-of-27 shooting from the field last season in a 69-43 win over San Tan Foothills HS, and also achieved a career-high of 23 rebounds on two separate occasions last season.  She also poured in 22 rebounds in a 55-34 win over Morenci HS.

Abalos flat out carried her team last season - leading the team in almost every statistical category.  The team was very young last season and did not have one senior on their roster.  Abalos' tremendous exploits were good enough to lead her team last season to a strong 23-7 overall record on the season - amazing feat for one player.  While her team would compete hard in every game, they would fall in the first round of the state playoffs in blowout fashion at the hands of Camp Verde HS (48-21).

This season, while leading a team that returns every player from last year's group, Abalos will look to have her best season of all.  While it is very difficult to have a better season individually than she had last season, especially with much more focus on her this season and many double-teams in store for her each night out, Abalos will look to provide even more leadership to a group that will need it.

Abalos is a very underrated prospect among the top-rated girls prospects in the state.  While college coaches will soon be knocking down her door and blowing up her phone in the near future, she is still a lesser known name among the state's top girls prospects.  Currently rated among our top 5 overall prospects in the 2014 class, Abalos did not disappoint in the recent Arizona Preps Fall Showcase event, where she quickly gelled with her teammates in the event, although she knew only a few of them.  Abalos provided excellent leadership for her team in the event and was a joy to watch play, and also a big hit with her teammates and the scouts in attendance.

Abalos is a very skilled and gifted talent that does whatever is required of her on the floor.  She is capable of playing several positions on the floor in the frontcourt and has an excellent feel for the game.  She is fundamentally sound and allows the game to come to her and does not force the action.

A very good scorer around the basket, Abalos is crafty and has very good body control.  She has a very athletic frame with excellent physical build for her size, suggesting that she could be able to make the transition to the small forward position at the collegiate level, although she is needed in the post for her smaller high school program.  She is also a good shooter, but likes to score from mid-range and in the post at this point in her young career.  As she continues to mature as a player, look for her to stretch her game to the perimeter over time.

A very strong rebounder on both ends of the floor, and for her size, Abalos is a high-energy performer that also rebounds outside of her area on the floor.  She keeps the ball up high, which allows for her to get easy put-backs on the offensive end.  She also outlets the basketball very well to the open guard on the floor, starting the break, and then runs the floor extremely well and is a good finisher in transition.

She is also a very good defender that competes at a high level and has excellent energy and is very vocal on the floor.  A very good team defender, Abalos has a great attitude on and off the floor, which makes her an excellent teammate to play with.

Abalos looks prepared to have another big season for her father and Safford HS this season, and I will definitely be watching her closely, as she has quickly developed into one of the state's premier talents and college prospects.