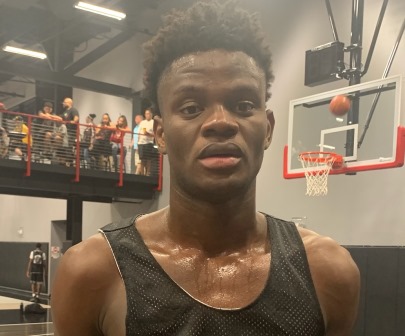 Tournament organizer Chad Groth held his annual Area Codes Freshman/Sophomore Camp last weekend, his 7th version of the annual event. Hillcrest Prep highly promising 6-foot-9 sophomore guard/forward Sadraque Nganga is now the Camp MVP in (2) of the annual events, after an epic perfomance this weekend proved just how good this young man has become and could continue to become.

Recently, Nganga changed schools in very surprising fashion, as the gifted young prospect abruptly changed college programs locally without much notice - leaving AZ Compass Prep and landing at Hillcrest Prep. AZ Compass Prep has it's deepest team of talent ever scheduled to take the floor this season, while Hillcrest Prep has the most talented starting five in the national prep school ranks. Nganga is now part of that group, which will include Dalen Terry (University of Arizona commit), Michael Foster, Keon Edwards and Puff Edwards. Kyree Walker is still deciding on his future for this season.

This past weekend, Nganga proved just how good he currently is as a college prospect, and showed a glimpse into how good he will become over the next couple years, as he completely dominated his competition in the Freshman/Sophomore Camp hosted by Chad Groth.  In the event, Nganga displayed an excellent handle of the basketball and an overall offensive skillset that proved that he is a legitimate ball handler and playmaker in the open floor and half court set at 6-9 and still growing physically.  A typical foreign prospect with a balanced ability to score inside and out, while having the ability to make players around him better with his ability to create off the dribble and advance the basketball to the open man on the floor.

A native of Anglola, Africa, and here in the United States on an I-20 clearance, Nganga is currently rated among the Top 30 prospects nationally among national basketball scouts and media for the 2022 class.  After watching him perform this weekend, although there were very few prospects in the camp that have similar potential, Nganga showed why he I believe that he will be a national Top-20 prospect in the class throughout his high school career and a future McDonald's All-American selection.  He is as versatile a prospect as there is in the class nationally already, and he is still growing a great deal.  He has already grown significantly since I last saw him play, which was very impressive to me, and also gave me a good idea of what he will become and grow into over time.

Nganga currently possesses offers from Arizona State and Oklahoma, and it is just a matter of time before this young man receives offers from just about everybody in division-I athletics.  Look for many more schools to begin extending offers to Sadraque as numerous college programs around the country begin to focus on him.

Sadraque just completed a spring and summer where he traveled on the AAU/club circuit with superstar NBA performer Lebron James' highly-acclaimed club program for his son, Lebron James Jr.

This weekend's performance by Sadraque proved again his extreme versatility and skill level, which will benefit such a loaded Hillcrest Prep team this high school season/ He will be absolutely fun to watch over the next three seasons of high school basketball.