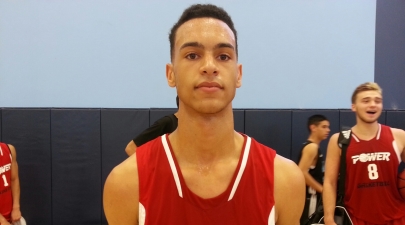 Dobson High School's sharp-shooting 6-foot-4 senior guard prospect Ryan Richardson has given a verbal commitment to a program in the Big Sky Conference. Richardson has developed into one of the state's top prospects in a loaded 2014 class.
Share
Facebook Twitter LinkedIn WhatsApp Pinterest Email

It is that time of the year when top-rated prospects from the 2014 class will begin dropping off the recruiting list, as commitments should begin to pour in from one of the state's top classes ever - possibly the best.

With several prospects in the class already having given verbal pledges to college programs, you can now add Dobson High School's 6-foot-4, 180-pound senior guard Ryan Richardson to that list.  After a solid showing this spring and summer and a strong junior season last year, Richardson has ended his college recruitment - finding a college program that best suits him for the next level.  On Sunday evening, Richardson gave a verbal commitment to a rising program in the Big Sky Conference, as he decided that he will sign with Weber State University this fall.

Weber State head coach Randy Rahe and his basketball staff have worked hard to recruit the state of Arizona for many years, and have done an excellent job of reeling in some of the state's best basketball talent.  Last year the program signed Marcos De Niza HS star guard/forward Richaud Gittens, and previously Kyle Tresnak of Horizon HS and Byron Fulton of St. Mary's HS.

After a solid sophomore season for Perry HS and helping lead the team to a strong 21-9 overall record, Richardson decided to transfer high schools for his junior season and landed at Mesa’s Dobson HS where he played for long-time successful head coach Rick McConnell.

Richardson would compete with a very loaded team last season, which included sharp-shooting guard prospect Kodi Justice (Arizona State commit) and the state’s top 2013 prospect, Jaron Hopkins (Univ. of Colorado signee).  While playing with such other top-rated prospects on the team, Richardson would shine – averaging 16.9 points, 1.9 assists and 2.9 rebounds per/game.  While the team would finish with a subpar 19-12 overall record on the season and fall to a loaded Mesa HS team in the state playoffs, Richardson would make a strong case for himself among the state’s top 2014 prospects.

Congratulations to Richardson on this tremendous accomplishment for himself from our staff here at Arizona Preps.

Arizona Hoop Review Scouting Report: Richardson is a lengthy shooting guard prospect that has a solid skillset at this point in his young career.  He is an excellent shooter with very good range on his shot and is able to get his shot off effectively in the half-court set, as he finds the open spot on the floor and is able to stretch the defense.  He will need to become more effective off the dribble to raise his overall play, and also show a better ability to finish strong at the basket over bigger defenders.  Richardson is a good team defender but needs to continue to develop in his ability to defend quicker guards one-on-one.  He is a solid ball handler and passer and is a very good looking prospect physically.  He is a good athlete for his size, although he does not always play athletic.  Richardson does have excellent upside as a college prospect, and should develop nicely over time into a serious college player.