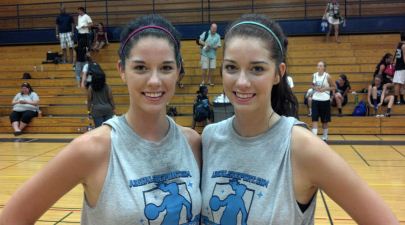 Highland High School had a very strong campaign during the 2011-2012 high school basketball season - finishing with a stellar 29-5 overall record on the season.  The Hawks reached the Division-I State Quarterfinals last season before falling to Dobson HS at Wells Fargo Arena.

While this year's version of the Hawks will have lost 7 different seniors from last year's team to graduation, Highland will return a pair of twin sisters that will look to do their part in helping the Hawks get back to the level they were last season.  5-foot-11 senior forward Rebecca Rudd and 6-foot-1 senior post Elizabeth Rudd will return for head coach Miner Webster this season to give Highland, once again, one of the tallest teams in the state, if not the tallest.

While these two ladies have excellent size, they are both very versatile prospects.  Rebecca is a small forward prospect that has a very good feel for the game, and possesses a sweet shooting stroke with excellent range.  She has a good overall skill level and is fundamentally sound.  Elizabeth, the taller of the two, is a power forward prospect that is also very skilled and is an effective rebounder and scorer around the basket.  Elizabeth also has a nice shooting stroke which she is able to use to stretch the defense.

The Rudd sisters were both top performers at the recent All-Arizona Showcase organized by Ron Coleman, and I caught up with both of them after the event.

"We enjoy the game of basketball," said Rebecca Rudd.  "We just decided that we now want to play in college."

The Rudd sisters advised me that they were not sure about playing collegiately next fall, until recently when they began to receive serious recruiting interest from Concordia College in California.  The school has been in contact with both sisters are looking to extend a scholarship offer to both sisters.  William Rudd, their older brother, currently plays on the men's team at Concordia.

The Rudd sisters also told me that past injuries kept them from reaching their potential as players, and also forced them to consider a future without college basketball.  They are both very healthy now and also well engaged in their basketball futures - especially since both prospects should garner much more recruiting attention this high school season.  Both Rudd sisters are division-I prospects by my account.  This season will determine just what level of college program they land at.

Rebecca and Elizabeth told me that, like many other twins, they seem to know where one another is on the court and enjoy playing together on the floor.  This season that will be the case a great deal.

The Rudd sisters competed for the Arizona Magic Elite club program this past spring and summer.