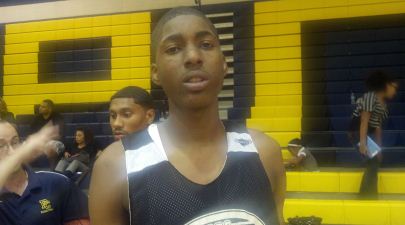 One of the elite prospects in the Arizona Community College Athletic Conference (ACCAC) this up & coming junior college basketball season will be Glendale Junior College 6-foot-5 sophomore guard/forward Ronald March.

A division-I transfer a year ago from Houston Baptist University, March has developed nicely over the past several years into a serious division-I talent.

A 2011 high school graduate of one of my favorite high school programs in the state, Thunderbird High School, March was coached by terrific head coach Buddy Rake and his hard working basketball staff.  March blossomed throughout his junior and senior seasons of high school - leading his Thunderbird team to a near state title, before falling in the state's semi-finals.

March would then play on the spring AAU/club circuit and raise eyebrows of many college coaches in the process - earning a scholarship to Houston Baptist University.  After one season at Houston Baptist where he played a significant role as a freshman for the college program, March would struggle academically and decide to transfer back to the state of Arizona - landing at Glendale Community College.

Last season, in what would have been March's sophomore season, he decided to red-shirt throughout the 2012-2013 season for Glendale JC head coach Damin Lopez.  Lopez also had several other prospects red-shirting as well, so this season will look to be a very strong one for the Gauchos.

If March had played last season for Glendale, he would have looked to have been one of the top 5 overall prospects in the conference last season.  After a pre-season where March looked almost unstoppable offensively, March looked to be well on his way to a strong season and a boost in his college recruitment.

March is a versatile wing prospect that is capable of playing several positions on the floor and is a very skilled performer.  He is an athletic, long and rangy prospect with a very good motor and an ability to handle the basketball like a guard and shoot the basketball with range on his shot.  He is excellent off the dribble and can get his own shot at any time in the shot clock.  He also takes high percentage shots for himself and does not waste movement or dribbles when he is looking to score.    He is an excellent finisher in the lane and in traffic and thrives in the open floor.  He possesses very good body control and uses his long wingspan to make plays on both ends of the court - making the game look easy.

Capable of playing the point position as needed, March is an asset on the floor and is capable of making plays for himself or others.  He has good court vision and an excellent feel for the game - developed through the strong coaching he received as a younger prospect.

Defensively, March plays the passing lanes very well and has excellent court anticipation - allowing him to make steals in the open floor and finish plays in transition.  He is a very good on the ball defender and has very good lateral quickness.  He is also a very good shotblocker with nice timing and reach.  He is capable of becoming a lock-down defender when he wants to focus in this area.

A fundamentally sound performer, March is as skilled a wing prospect as there will be in the country this junior college season.  Recently he attended a junior college showcase in Las Vegas and was selected among the top 20 prospects in the event.

March has worked hard in the classroom over the past year to improve his academic performance and Damin Lopez advised me that he feels March will be on pace to graduate from the school in 2014.  March was an academic qualifier out of high school.

March should generate loads of division-I interest this junior college season, as he looks to lead a talented group at Glendale to the top of the ACCAC this season.