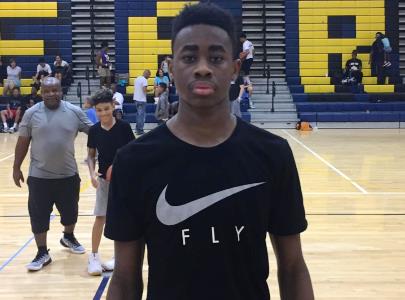 On Sunday, October 9th 2016, Ron Coleman hosted his Discovery Camp on the campus of Phoenix College.  This event served as a coming-out party for some of the top young talent in the state (7th grade - freshman), and it was great to get an early look at the next wave of Arizona’s youth before the high school season begins here in just a few short weeks.

Thanks again to Ron Coleman for putting on such a great event, and I really look forward to tracking a majority of these future Arizona high school basketball prospects.

Of the games I personally observed, here are my notes and observations of the players that were in attendance:

2020 6’4 SF Anthony Garza of Shadow (Surprise) Ridge HS (AZ Storm) was one of the prospects who caught my eye right off the bat, due to his size and ability to run the floor at such a young age. He displayed solid mechanics shooting the ball, but was really at his best when he was running the floor and finishing during fast break situations (had one big dunk in transition).  While he was one of the tallest players in attendance, he made it a point to play hard on the defensive end, and came away with a couple big blocks.  He also pulled down a greater majority of the rebounds that came his way on both ends of the floor.  A prospect with a lot of upside, I look forward to seeing Garza play this upcoming season.

2021 5’10 PG Ricardo Sarmiento of ASU Prep is a true floor general on the court, and really does makes his teammates better (looks for his teammates first before he looks for his own shot).  He has great lift on his jumper from the mid-range (knocked down shots at a very good clip), and has a good floater that he uses very frequently in the lane to score over big defenders, if need be.  He also has a very tight handle of the basketball, and is very shifty as well - making it hard for players to stay in front of him.  Sarmiento is, by far, one of the top guards in the 2021 class in Arizona.

2020 6’0 CG Za-Onta Boothman of Buckeye HS (Team Bayless) is a big time guard prospect for the future, and is one of the best 2020 prospects in the State.  Boothman plays beyond his years from both guard positions and uses long strides/ pushing the ball in-front of him to get by defenders when he is in half-court setting. He also has a solid handle of the basketball, and did not turn it over very often.  He also has a good IQ and vision, in regards to making the right play for himself and setting his teammates up for possibilities for them to score.  What stood out to me about Boothman is his ability to thrive off of contact in fast break/ half-court situations and play through a bump/ hit and score the ball.  I really look forward to seeing him compete this season, as he has a very bright future.

2020 6’1 SF Jalen Anderson (pictured) of Hamilton (Chandler) HS (Arizona Wizards) had a very big day and established himself as one of the better freshman in the state.  Anderson recently moved to Arizona from Tennessee and plays beyond his years.  He was really able to bully by any defender in his way, and get into the lane and finish with relative ease.  Anderson is very long as well and is athletic for his age, as he finished some very tough, aerobatic finishes throughout the day.  Anderson also blocked some shots on defense as well.

2020 6’2 SG/F Opulley Taban of Apollo (Glendale) HS was one of the better shooters on the day at the event in both drills and in game-like settings.  Taban really thrived when he was able to spot up and shoot, as he knocked down a greater majority of his shots from 3.  Once he puts on more weight, he will also be able to attack the basket more effectively.  Opulley is the younger brother of elite 2019 wing Emmanuel Taban.

2020 5’10 CG Tommy Anderson of Valley (Las Vegas) HS is a powerful guard for such a young age, and was really able to use his physicality to his advantage in drills, and when he was driving to the basket to score the ball.  Also was able to knock down open shots as well.

2020 5’8 PG Nahshon Harper of La (Avondale) Joya HS (Team Legacy) is a skinny, but very effective point guard with a high basketball IQ/ vision.  He truly looks to set up others and had completed some high difficulty passes to teammates to set them up for easy lay ups when he was pushing the ball/ in the half court. Harper was also able to blow by defenders and finished some very tough finishes.  Harper is a prospect to keep an eye on for sure in Arizona’s 2020 class.

2020 5’9 CG Trent Hudgens of Moon (Phoenix) Valley HS (Team Legacy) was one of, if not, the best shooters in the event.  He also won the 3-point shootout as well.  He possesses a very quick, clean release as was able to knock down shots from spaces all over the court.

2020  5’11 CG Isaac Monroe of Peoria HS had a good day overall scoring the basketball in a variety of ways.  Monroe is a wirey, volume shooter who really can hit shots, once he gets going, and also was really able to use his toughness to get in the lane and score the ball through contact.