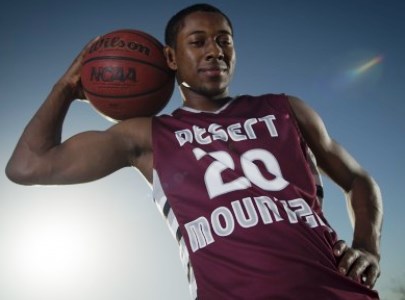 Desert Mountain High School's gifted 6-foot senior point guard prospect Rolando Rhymes currently has one division-I offer on the table for himself. Rhymes is among the most difficult players to defend in the state.
Share
Facebook Twitter LinkedIn WhatsApp Pinterest Email

While his individual college recruitment has yet to fully take off, Desert Mountain High School's gifted 6-foot, 165-pound senior point guard Rolando Rhymes is among the best pure talents in the state of Arizona.  While being a member of the state's very loaded 2014 class, Rhymes has developed himself into one of the state's top overall prospects, and also one of the state's most difficult players to defend.

No high school player in the state last season had a better season from beginning to end than Rhymes.  After a season of sitting out due to AIA transfer rules, Rhymes returned to action last season and looked better than ever, as he emerged into one of the states elite overall prospects and among the best pure point guard prospects in the state.

Rhymes would lead Desert Mountain to a strong 25-6 overall record  in the state’s top Division-I Class of schools.  He would turn in his best high school season of his young career – averaging 15.1 points, 4.5 assists, 3.9 rebounds and 2.1 steals per/game.

Rhymes' numbers do not tell the story, as this young man was among the most difficult players to defend last season, and actually took over many games last season for the Wolves.  Rhymes was almost unstoppable at times last season, as teams tried to slow him down and he found ways to lead his team to victory - either by scoring, assisting or both.  While leading a very talented team of college prospects last season, Rhymes was the catalyst for one of the state's elite high school basketball programs.

For his exploits, Rhymes was selected by the Arizona Republic after last season as a member of the 2013 All-Arizona First Team.

Rolando has been regarded among the best talents in the state since he was a youngster, but this past season on a loaded Desert Mountain HS team, Rhymes put it all together for the state to take notice of his tremendous ability to make plays with the basketball in his hands.

As a result of Rhymes' strong play this summer, he received his first division-I scholarship offer from Binghamton University during the month of July.  Rhymes is also now receiving strong interest from many different schools, as NC State, Saint Mary’s, UC-Irvine, UC-Riverside, Tulsa, Cal-State Bakersfield and North Texas have been in contact with the talented guard prospect.

Rhymes is as good a pure point guard prospect as there is in Arizona’s loaded 2014 class, and this season I look for many college programs in need of a point guard to take a hard look at Rhymes.

We will continue to follow the college recruitment of Rhymes closely this season, and bring you any updates as they continue to develop.

Arizona Hoop Review Scouting Report:  Rhymes is a shifty, pass-first point guard prospect that is capable of making plays for himself or others off the dribble.  His crafty approach to the game and speed off the dribble make him very difficult to defend when he makes up his mind to get to the basket, where he is also a very good finisher in traffic.  He utilizes a variety of floaters when in traffic to finish plays, and has excellent body control in traffic.  He pushes the basketball up the floor and finds the open man on the court quite often, and is able to make players around him better – a nice attribute.  Rhymes is also an excellent defender with quick hands and feet, and is able to get many pass deflections through passing lanes, while also forcing pressure on opposing guards.  Rhymes is capable of becoming a lock-down defender over time with maturity physically.  Rhymes is as good a pure point guard prospect as there is in Arizona’s loaded 2014 class.