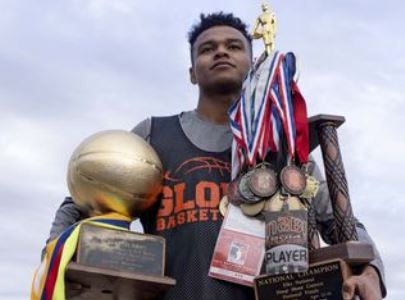 While most did not think it could be done, Globe High School's 5-foot-11, 150-pound senior guard Robert Burries is now the state of Arizona's all-time leading scorer, after a record-setting Friday night win by his team over St. Augustine HS, 82-48.  In the big win, Burries scored a game-high 41 points and dished 7 assists.

Burries now holds on to the state's career scoring record with 3,171 career points and counting.  Burries broke former Estrella Foothills HS star guard Corey Hawkins' scoring record of 3,154 points.  Hawkins had previously broke Mike Bibby's scoring record of 3,002 points set in 1996.  Burries also currently leads the state of Arizona in scoring, regardless of class - averaging an eye-popping 37.9 points per/game.  Burries has been on an absolute tear as of late also, scoring 35 or more points in 10 consecutive games.  He exploded for 54 points in his team's victory on Tuesday over Tucson's Desert Vista HS.

Burries, while only standing 5-11 in height, is an absolute load for opposing team's to defend, and he has led Globe HS to an impressive 21-2 record this season in the 2A Division.

Burries has had an historic career in Arizona, and what is most amazing about this young man's career is just how consistent he has been as a dynamic scorer in the state.  Last season as a junior, Burries averaged 30.2 points per/game, and as a sophomore he poured in 26.3 points and 5 assists per/game.  Burries also exploded for an incredible 68-point game outburst as a freshman.

While Burries is the state's best individual scorer, he does play in a smaller division in the state, which has hurt his opportunities to be seen by college coaches, scouts and media.  Burries has torched his competition consistently since entering the Arizona high school ranks, and is a legendary scorer in a rural area where college coaches have seldomly ventured, so Burries has soared well below the recuting radar of most college programs.  This young man can flat out play and is worthy of serious recruiting attention, and maybe this amazing exploit will draw him some recruiting attention, as he now officially is Arizona's top all-time leading career scorer.

Burries has Native American bloodlines also, which makes him a role model for all young men on the reservation.  He is Apache and Navajo and is an absolute fan favorite, and also someone that could, over time, really benefit the Native-American communities.

Burries is also a fine young man with a belief in God and a great personality and smile.  He is a positive role model for many, including the Native American community, and I am very touched by his development as a young man and also the level of humility that he continues to show in his exploits.  God does not make mistakes, and the performance by this young man throughout his high school career has been legendary.  His gifts and talents are spiritual and his performance has been nothing short of epic.

I am very proud of him.  Congratulations B.J. on an amazing Arizona high school career from our staff here at Arizona Preps.  Now go out and finish it off - winning it all this season.

Arizona Hoop Review Scouting Report:  Burries is an electric guard prospect that plays with pace and with a high motor.  He pushes the basketball up the floor and makes plays for himself and others, and is a threat to score from anywhere on the floor, especially from longer ranges where he uses a nice left-handed shooting stroke to make shots with regularity.  Burries is shifty off the dribble and can finish plays over bigger defenders and in the paint.  He is a very good finisher for his smaller size and stature.  While he will definitely need to add much more physical size to his small frame over time to excel in the rigors of college basketball, he definitely has the offensive skillset and capability to play at a high level.  Burries is also an excellent ball handler and passer that pushes the ball up the floor to the open man, and sees the floor very well.  He has the ability to make players around him better.  Burries has Native American bloodlines also, which makes him a role model for all young men on the reservation.  Burries is a fan favorite and someone that can, over time, really benefit the community he resides in.  A fine young man - on and off the floor.