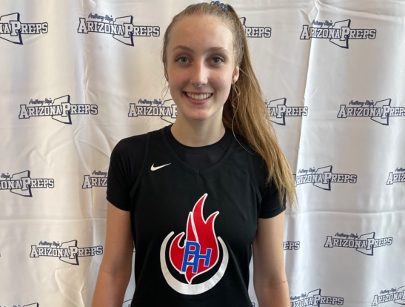 The Girl's Fall Showcase event was an exciting event - filled with numerous high school varsity girl's programs for the event. There were many top individual and team performances throughout the event. As a result of all of the top performances that were given throughout the event, there were two top performers that stood out from the competition, as two teammates, PHH Prep senior guard/forward Hannah Robbins (University of New Mexico commit) and senior point guard Jaida Brooks (San Diego State commit) both took home the CO-Fall Showcase Tournament MVP honors, as a result of their tremendous play throughout the event - leading PHH Prep to an undefeated record in the Showcase.

Robbins continues to develop in preparation for her college career in the Mountain West Conference. Robbins transferred to PHH Prep at mid-season last year during the Grind Session, which her program eventually won the championship. She has grown in her self-confidence over the past couple years, and showed excellent leadership for her PHH Prep program thoughout the event. Robbins is a very skilled and fundamentally sound performer that has excellent versatility as a player - able to plays several positions on the floor and distribute the basketball to her open teammates. She knocked down shots with regularity and extended the defense with her shooting prowess. Robbins also defended very well and competed hard on both ends of the floor, which included rebounding outside of her area and pushing the ball on the break for scoring opportunities on the other end. Robbins also showed focused teamwork and inspired her teammates when she was off the floor.

Robbins is headed to New Mexico next fall, where her father Rob Robbins also played collegiately. She will look to make an impact at the program, and should see considerable minutes as a freshman in a very competitive conference. Robbins will also look to lead PHH Prep in her senior season, as the very gifted girl's program looks to repeat as Grind Session Champions in a much-improved Grind Session for girls basketball nationally.

Helping Robbins this season with the PHH Prep program will be our Fall Showcase CO-MVP, senior point guard Jaida Brooks (San Diego State commit). Brooks was terrific last season for the PHH Prep program, and is a very underrated guard prospect nationally, as she is as pure a point guard as there is out there. Brooks showcased her advanced skillset and toughness in this year's event - making shots, creating off the dribble and finishing at the basket and keeping her teammates fed with the basketball. While a smaller point guard prospect, Brooks is very tough and physical and competes like a much bigger player, as she is a flat out winner and does what it takes for her team to be victorious.

Brooks gave a big verbal commitment in the spring to San Diego State University and their women's basketball program, which will see her joining fellow-prep teammate Hannah Robbins in the Mountain West Conference next fall. This young lady will also play a lot early as a freshman at SDSU, as she competes hard and is a leader - both on and off the court. Brooks plays with superior confidence, which will benefit her nicely over time.

Congratulations to these two young ladies and good luck to both of them in their terrific basketball futures, as high school seniors and also in college and beyond.