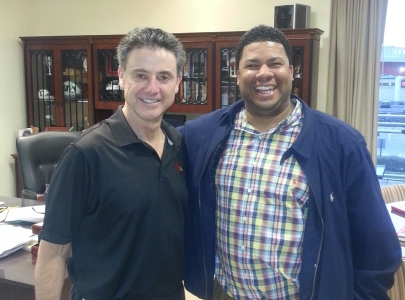 On Saturday evening, one of the nation's elite head coaches and one of the most respected coaches, at any level, ventured to the state of Arizona for an opportunity to watch one of the state's hottest prospects take the floor.  NCAA defending national champion and University of Louisville head coach Rick Pitino flew to the state of Arizona just hours after his team defeated Cincinnati on Saturday afternoon to evaluate Westwind Prep Academy 6-foot-3, 180-pound senior guard Lyrik Shreiner.

Shreiner recently took his first official recruiting visit to Louisville just weeks ago after the top-rated program had already offered a scholarship to Shreiner.  This was an opportunity for Pitino to observe Shreiner playing in a high school state playoff game in this year's Charter School tournament playoffs.  Shreiner and his Westwind team would defeat their opponent by ore n 60+ points in the game and post more than 100 points in the contest - making it very difficult for Pitinio to evaluate Shreiner's performance in the game.

Pitino would fly back to Louisville after the game on his private jet airplane, and after giving greetings to the many startled fans in the Camelback High School gymnasium.

The past month has been a whirlwind in the college recruitment of Shreiner.  After numerous recent strong performances at Westwind Prep, Shreiner saw his recruiting stock soar – reeling in college recruiting interest from numerous high-major division-I programs.  After a recent scoring outburst where Shreiner exploded for 65 points – breaking the Arizona high school state scoring record on 26 for 27 shooting, college coaches have been ringing the phone off the hook for the Westwind Prep coaching staff and Lyrik Shreiner.  Shreiner aslo recorded a team-high 24 points in a narrow road loss to top-ranked Findlay Prep (NV) - a game in which he also held nationally top-ranked senior prospect Kelly Oubre (University of Kansas signee) to 7 points in the contest.

After receiving a tremendous scholarship offer from the University of Louisville, Shreiner would also receive offers from Baylor, Washington, Washington State, UTEP, San Diego and Grand Canyon.  He has also received strong interest from Kansas, UCONN, Missouri and Memphis.

Shreiner is still mulling over options of choosing a college program this spring, or heading to another year of post-graduate play - making him a 2015 college prospect.  Currently a 2014 prospect and still only being 17 years of age, Shreiner could benefit a great deal from another year of preparation before entering the collegiate ranks.  Shreiner would have time to get stronger physically, while having another club season to compete against the nation’s top prospects.  As a 2015 college prospect, Shreiner becomes a much more valuable asset to a college program, and would become one of the nation's elite college prospects - already possessing numerous high-major division-I scholarship offers.

Shreiner advised me that he is still unsure as to what he will decide at this point, but that he would like to be recruited as a point guard for the collegiate level.